A Wedgwood Marble Arch starred on a Christmas Commemorative plate in 1981.

Wedgwood was founded by Josiah Wedgwood in 1759. Its best known product is Jasperware, created to look like ancient Roman cameo glass. The most popular Jasperware colour has always been “Wedgwood blue”, an innovation that required experiments with more than 3,000 samples. 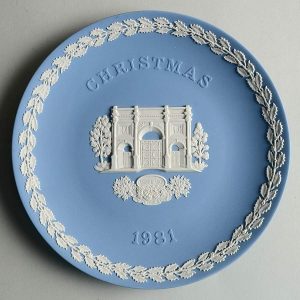 The last quarter of the twentieth century saw the company release new product lines specifically to celebrate Christmas and capitalise on the seasonal gift market. Between 1969 and 1988 one of these festive product lines were Christmas plates in jasper with white bas-relief decoration featuring London landmarks.

Wedgwood subsequently produced complementary Jasper Christmas tankards between 1971 and 1985, meaning Marble Arch adorns both a tankard and a plate.

The Jasper London landmarks were discontinued in 1988 but Wedgwood produced a few more London icons on Queen’s ware with bright painted designs, including the Houses of Parliament and Tower Bridge. They also released designs of “A Child’s Christmas” and “Christmas Traditions”.

You can take a look at these and more in the Wedgwood Museum Collection online (search Title: Christmas).

Interested in owning a Marble Arch Wedgwood plate or tankard? They can be found on online auction sites.

The Greenhouse: A Horticultural Curiosity on Porchester Place

The Greenhouse is a surprising and beautiful outdoor art installation outside the tower block at 25 Porchester Place. Also known…

Where are all the Souvenirs of Marble Arch?

Have you seen any souvenirs of Marble Arch? Up until the 1960s Marble Arch was on the top 10 list of…