This month marks the 13th anniversary since HRH The Princess Royal unveiled the Animals in War Memorial in November 2004.

The monument, which is located outside Hyde Park near Brook Gate, commemorates the remarkable animals that served, suffered and died alongside the British, Commonwealth and Allied forces in the wars and conflicts of the 20th century.  This monument is a tribute honouring all creatures from the large, such as mules which were silenced in the Burmese jungle in World War 2 by having their vocal cords cut, to the small, like glow worms that were used by soldiers as a source of light to read maps in World War 1. 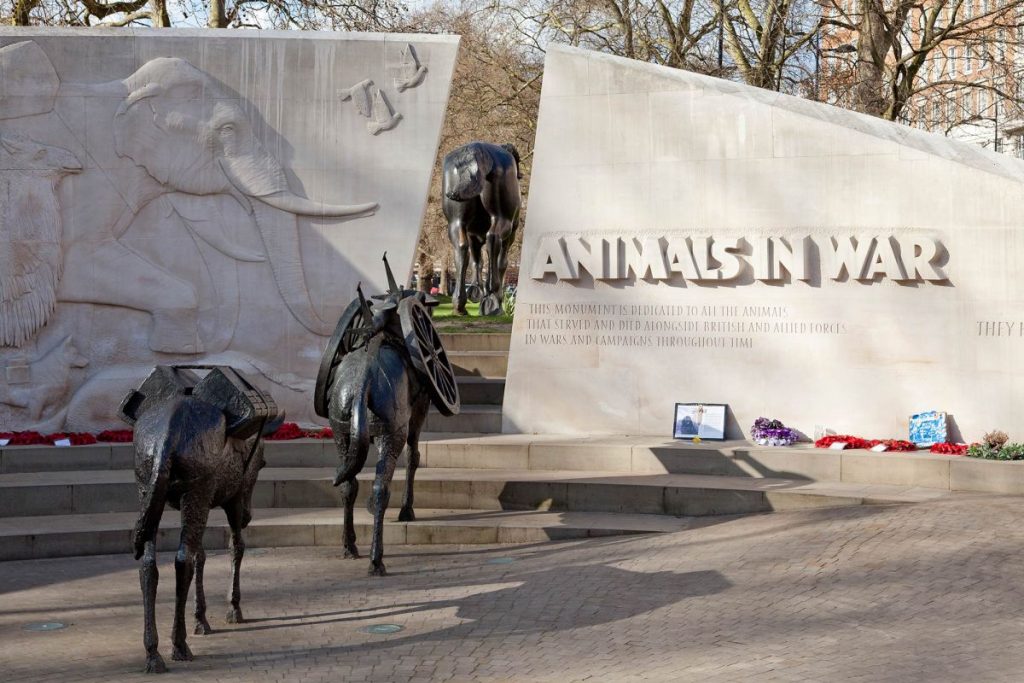 David Backhouse created the memorial to have three principal elements in the design; two different levels and a dominating and powerful wall between them.

The memorial includes a 58ft curved Portland stone wall engraved with carvings of creatures in the wars. The carvings are depicted in bas-relief on the inside of the longer section of wall. On the exterior of the wall, a line of ghostly silhouettes represents the animals lost in the conflicts.

The shorter section of the wall feature inscriptions on both sides, including the name of the monument and information about the war and the numbers of animals lost.

On the lower level, two bronze mules journey through a space to a gap in the wall, symbolising the war experience. The upper level features a bronze horse and dog facing north into the gardens, bearing witness to the loss of their comrades, yet representing hope for the future.

Jilly Cooper’s book, ‘Animals in War‘, inspired the monument. Showing the ubiquitous place animals hold in our hearts, a national appeal raised £2million to build the memorial, as well as the generosity of many individual donors, charities and companies, with support from the Estate of the late Paul Mellon in the USA, The Duke of Westminster KG OBE TD DL, and lead contractors, Sir Robert McAlpine. Other major gifts were generously given by The Rt Hon The Earl of Cadogan DL, Rt Hon The Lord Ballyedmond OBE and John Spurling OBE. 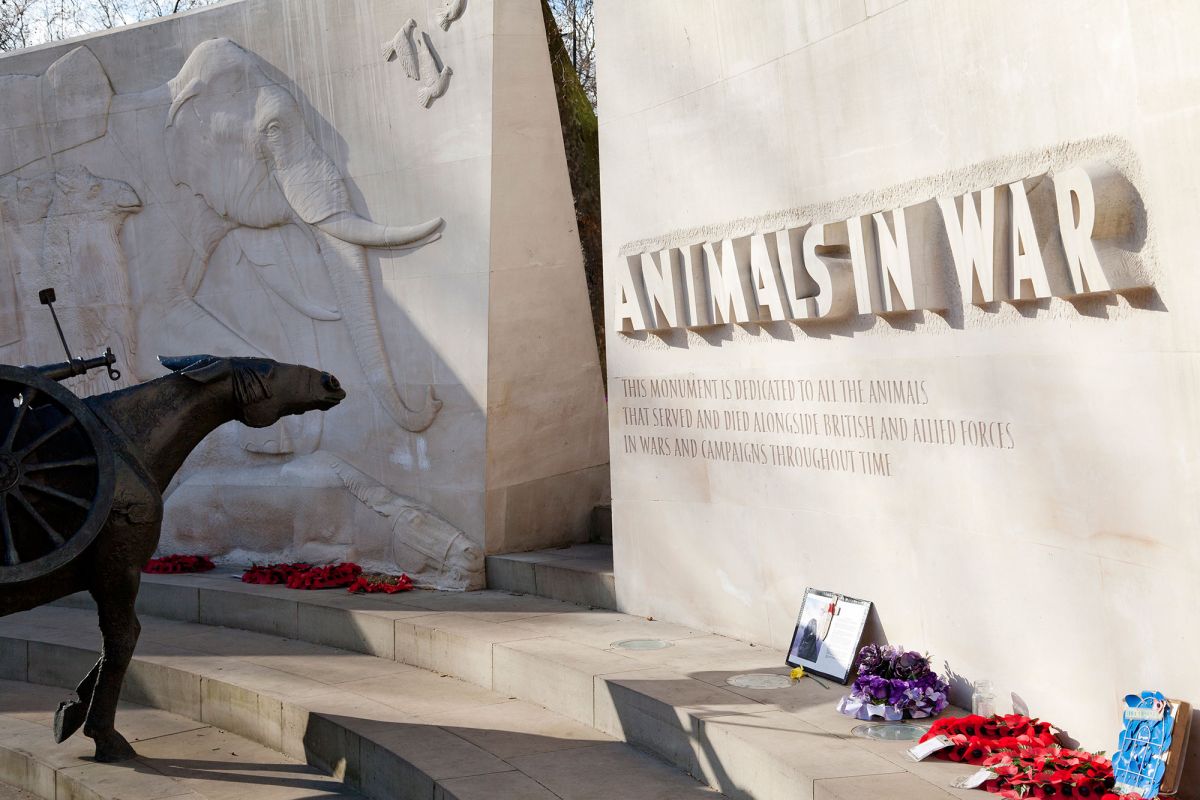 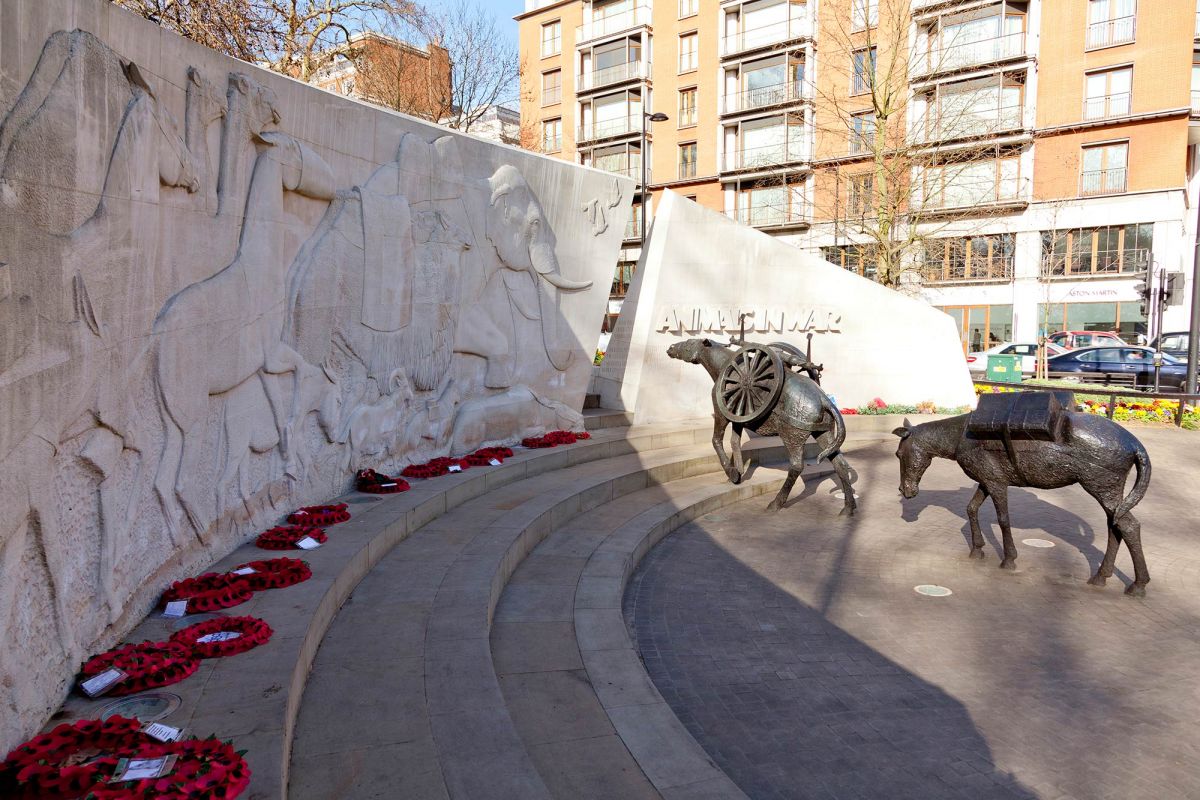 While Edgware Road and Marble Arch have many wonderful things to commemorate, the attacks on Londoners on 7 July 2005…