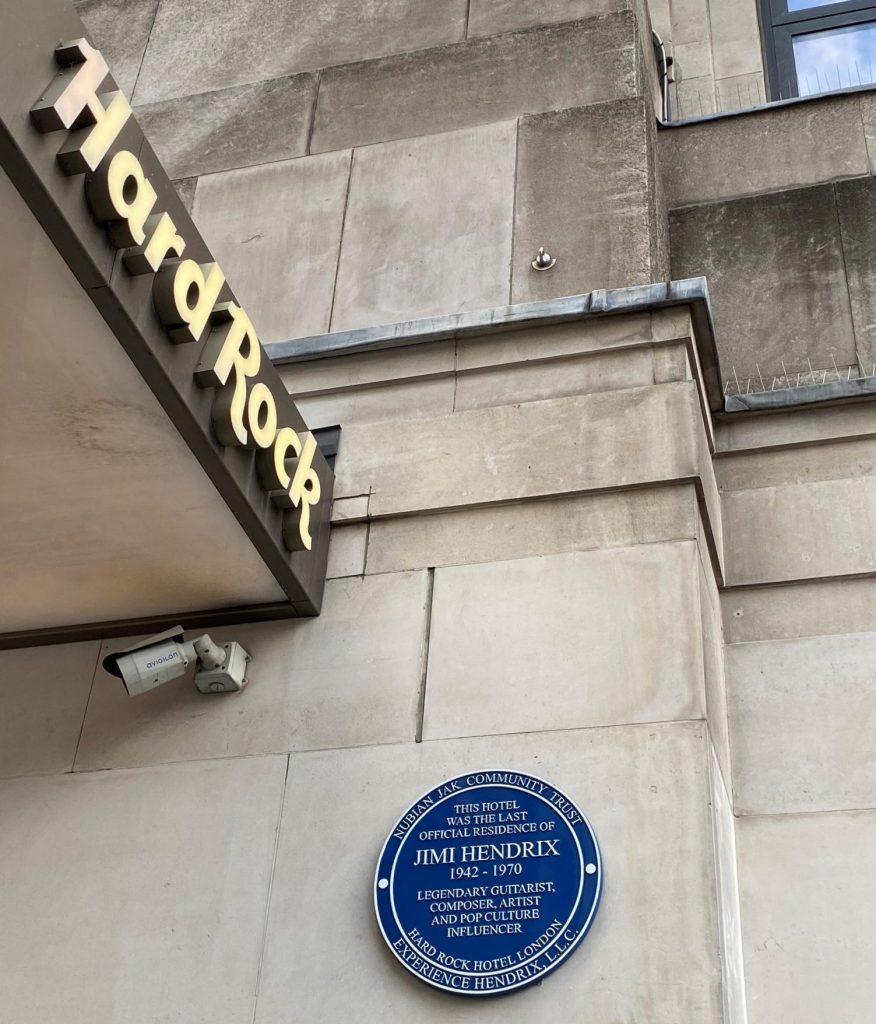 Jimi Hendrix stayed at the Cumberland Hotel on numerous occasions. It was there that he gave his final interview to Keith Altham for the NME on 11 September 1970, six days before he was found dead of an overdose in an apartment in Notting Hill. He was just 27. Jimi Hendrix’s last address is recorded as The Cumberland Hotel on his death certificate.

The Hard Rock/Cumberland connection is also manifested in the fact that Hendrix wrote song lyrics on the hotel’s stationary that survive to this day and are vaulted in the archives of Experience Hendrix. 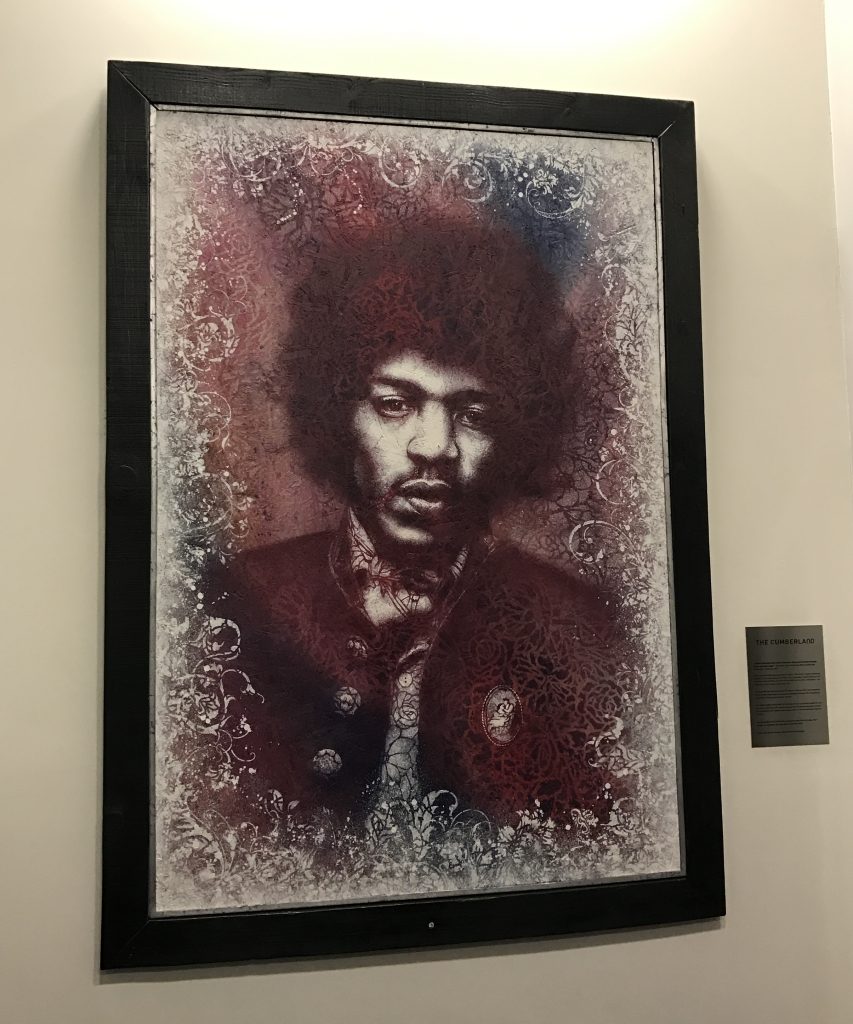 A portrait of Jimi Hendrix at the Cumberland Hotel

James Marshall Hendrix, better known to the world as Jimi Hendrix, has been greatly admired for his pioneering musical influence and remains an ever present cultural icon in the fabric of life as we know it. London was an important part of his story, where he formed his first rock band, the Jimi Hendrix Experience. With him as the front man they took the music world by storm with Jimi going on to reach the status of rock god.

This is London’s second blue plaque plaque commemorating Jimi Hendrix. The first plaque was unveiled in 1997 at his 1968-69 Mayfair residence by English Heritage – the national plaque charity that since 1966 celebrates the links between notable figures of the past and buildings in which they lived and worked. With two blue plaques, Jimi Hendrix is in rarified company of the few who have their name grace multiple Blue Plaques. These notables include Mahatma Gandhi, Prime Ministers Lord Palmerston and William Gladstone, and author William Makepeace Thackeray.

This new honour is bestowed by the Nubian Jak Community Trust (NJCT). Founded in 2006, NJCT is the only commemorative plaque and sculpture scheme focused on memorialising the historic contributions of Black and minority people of various ethnic origins in Britain and beyond.

I’m so proud of my brother Jimi and his being honoured again in London. His mission was to spread love across the world through his music, and we continue to see that come to fruition all these years later. Eddie, John and I all look forward to interacting with people on June 10, whose lives were touched by Jimi in London – a city that was so important to him and his career. 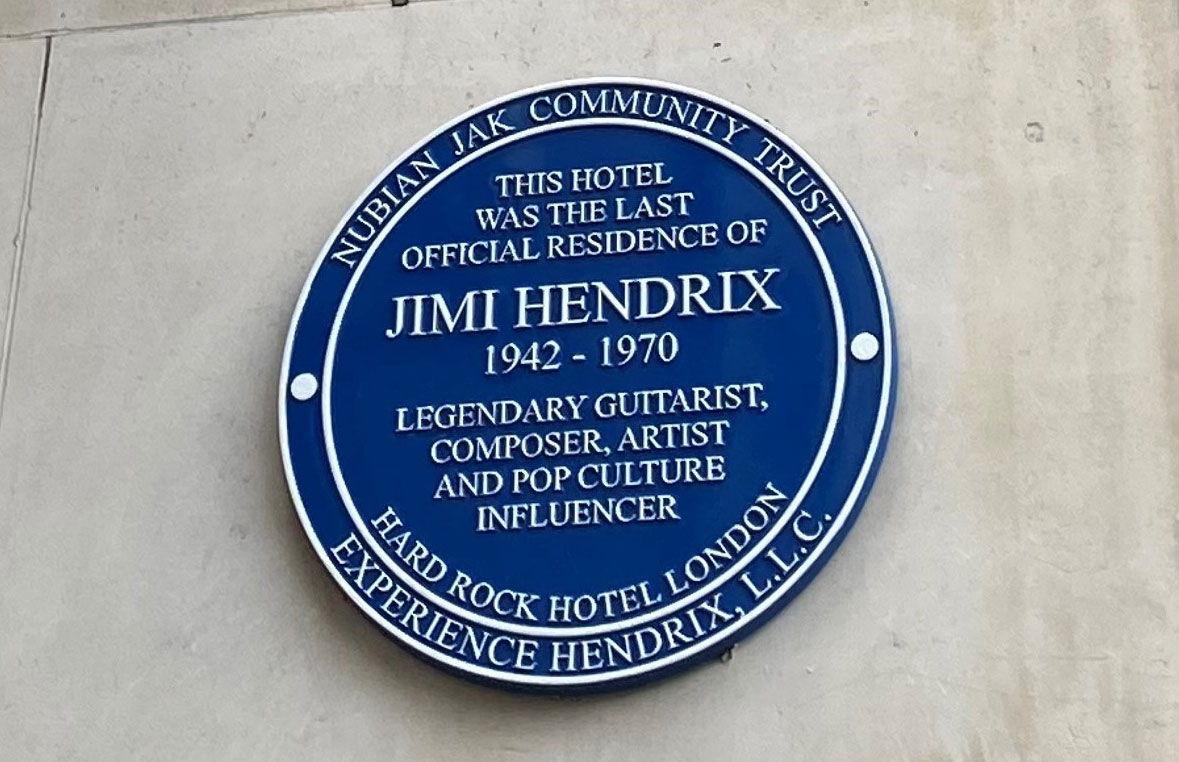 Jimi Hendrix stayed at the Cumberland Hotel on numerous occasions. It was there that he gave his final interview to…

Did you know that Marble Arch had its own record label? The Marble Arch area has a colourful music heritage…