“Flight” by David Breuer-Weil was unveiled today, 31 May 2018, at Marble Arch in conjunction with Christie’s Private Sales.

The latest monumental sculpture to be added to the area around the Marble Arch is part of Westminster City Council’s City of Sculpture.

“Flight” is a memerising sculpture depicting  a man taking to the skies. Unlike most bronze sculptures which often represent weight and place, “Flight” was designed to represent weightlessness and freedom. The piece suggests a society in which nobody is bound to one particular place.

David Breuer-Weil gained inspiration for the sculpture through travelling, stating, “I fly all the time and produce a large number of my drawings and small paintings when in flight. Flying frees the mind. Human aspiration and ambition has always been represented by the idea of flying. But it is also about human and artistic freedom, the possible flights of the imagination where anything is possible.”

While in flight, Breuer-Weil also comments that the sculpture represents being bound to one’s family and past, just as the artist is to his, remarking that the piece is “intimately connected with my Jewish upbringing”. He said: “Many of my sculptures, paintings and drawings have images of people attached to one another with straps or chords. These express either familial relationships or make visible the usually invisible connections that exist between people and situations.

“I lay tefillin every day and it gives me an inexpressible sense of connection and comfort. My new piece is very strongly influenced by that daily event. In the sculpture the figure is connected to the earth and to his past through these vast umbilical chords. These allow him to soar into the sky.” 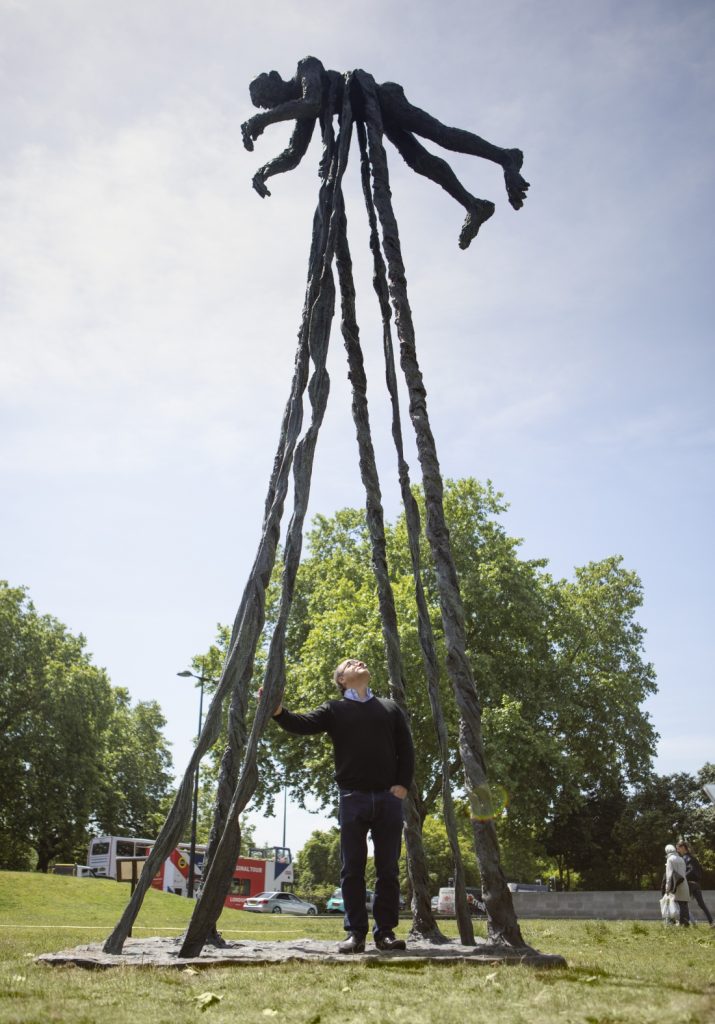 Flight and the artist David Breuer-Weil

City of Sculpture gives residents and visitors the opportunity to access public art in the streets and spaces around them and is made possible by the council working with private and public galleries to commission and donate public art pieces across Westminster.

Of local interest, Rick and Nick Carter’s gallery RN @ 5A, located in the Marble Arch London BID area is lending one its pieces to City of Sculpture at Kensington Gardens.

Marble Arch is also home to the permanent sculpture ‘Still Water’ by Nic Fiddian-Green, which has been at the Arch since 2010 when it replaced a previous, but smaller version temporarily installed on this site titled “Horse at Water”. “Still Water” is the largest freestanding bronze sculpture in London at 33 ft high.

Saturday 11 March 2017 saw the official unveiling of Danse Gwenedour at Marble Arch, as part of Westminster’s City of…

The Tusk Rhino Trail has charged into London and our very own kaleidoscope rhino has made its home at Marble Arch. We’re…