Jack Spot Comer was an East End gangster who was attacked outside his home on Cabbell Street, Edgware Road in 1956.

Son of Polish immigrant parents and born into grinding poverty in Whitechapel, Jack Spot joined his first gang at an early age.

According to Comer his nickname came from always being “on the spot” when trouble arose during childhood, but others claim it was because of the mole on his cheek. He grew up to be over 6ft tall, a good boxer and even better street fighter. Comer rose to rule the criminal underground via protection and gambling rackets, housebreaking and other cons. By the late 1940s he was making a fortune at the racetrack working in partnership with another famous gangster, Billy Hill, and had a fearsome reputation for “instant and savage retribution” to anyone who crossed him.

Jack married Margaret “Rita” Molloy in the 1950s and they had two daughters, keeping a house at Hyde Park Mansions, Cabbell Street by Edgware Road station. 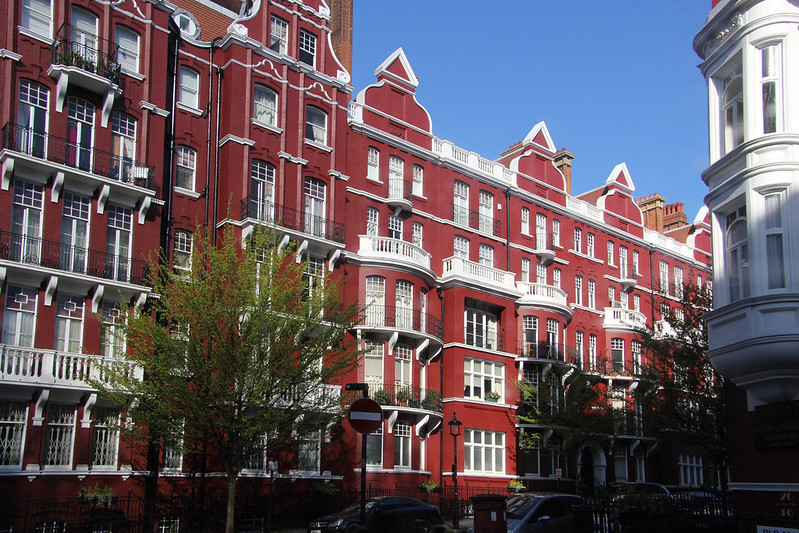 Although they had moved quite far from the East End he still got involved in a knife fight with a rival outside Bar Italia on Frith Street, Soho, resulting in some serious injuries on both sides. Although arrested, he was cleared of the charges.

With his gangster career in decline, rifts developed between Jack Spot and his old partner, Billy Hill and gang war festered. In 1956, Hill’s bodyguard, one “Mad” Frankie Fraser (already twice certified insane and having done plenty of prison time) led half a dozen heavies to Edgware Road and attacked Comer and his wife outside their home. A newspaper report in the Coventry Evening Telegraph on 3 May 1965 said:

JACK COMER, known as ” Jack Spot,” was still in St. Mary’s Hospital, Paddington, London, today after being attacked near his home at Hyde Park Mansions. Marylebone, last night. It is understood he was slashed with razors. A number of stitches were inserted in his face. Police were at his bedside most of the night and his 27 years old wife Margaret was called to the hospital to see him. He was stated to-day to be ” comfortable” and in no danger. Corner was attacked while walking with his wife in Cabbell . Street. Marylebone, about 100 yards from his flat.

Rita went to the police. Both Fraser and his associate Bobby Warren were given seven years in prison for the attack. Fraser later said he didn’t expect to be paid for slashing Jack Spot believing such a high profile target would earn him a priceless reputation.

Gradually withdrawing from a life of crime, Comer lived to the age of 84 but is said to have died penniless and powerless in Isleworth without his wife and children.

With thanks to Shady Old Lady, J-Grit and the British Newspaper Archive.

A Royal Film Performance of “The Forsyte Saga” film was held at Marble Arch Odeon on 17 November 1949. King…