John Lennon and Yoko Ono staged a Silent Protest against the execution of James Hanratty at Speakers’ Corner on 14 December 1969.

Speakers’ Corner, just a stone’s throw from Marble Arch on the corner of Hyde Park, is famous as a bastion of free speech. Traditionally every Sunday people gather there to hear folk turn up, talk and debate on any subject. 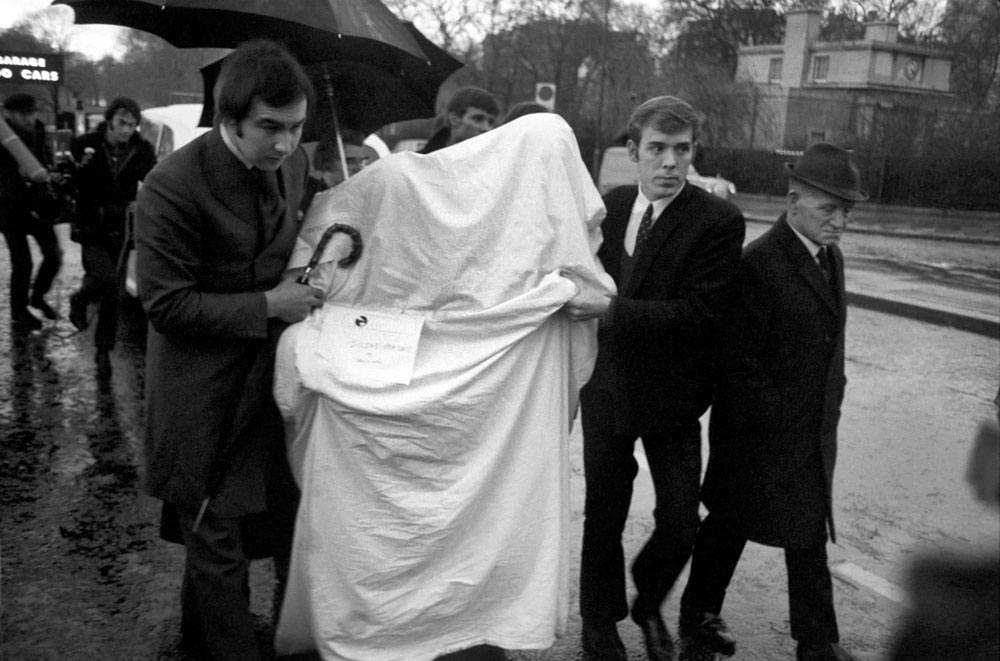 That particular Sunday in December 1969 John Lennon and Yoko Ono encased themselves in a white fabric bag and were driven to Hyde Park in John’s white Rolls Royce. Theirs was a silent protest against the execution of James Hanratty, the convicted “A6 killer”. Hanratty’s mother accompanied John and Yoko in the car. Hanratty’s father addressed the crowd maintaining his son’s innocence and calling for a public inquiry into his 1962 hanging.

Hanratty had been convicted of murdering 36 year old scientist Michael Gregson, then raping and shooting his 22 year old girlfriend, Valerie Storie on an August night in Berkshire in 1961. Storie survived the horrific attack but was left paralysed. She later identified Hanratty as the guilty man. He was arrested, tried and convicted of murder. The jury did not believe his alibi for being 200 miles away on the night in question. On the eve of his execution, Hanratty was said to have told his family, “I’m dying tomorrow. Clear my name”. Thus began a 50+ year fight to clear his name.

James was was one of the last people in Britain to be executed before capital punishment was abolished in Britain in 1965. His parents were introduced to John Lennon by a wealthy friend and it is said John and Yoko seized on the case as an opportunity for “peculiar protest“.

Six days after the Silent Protest at Speakers’ Corner, Lennon clarified that he and Yoko were “against killing”. They opposed capital punishment but hadn’t taken a view on Hanratty’s innocence. However, John Lennon did back a documentary called “Did Britain murder Hanratty” which was released by Apple Films.

Find out more about the History of Speakers’ Corner.