We came across the M&S Company Archive Twitter feed and found an incredible photo of Marks & Spencer Edgware Road from 1912. Subsequently, the company archivist kindly sent us more photos and these lovely stories about the history of the Edgware Road store. 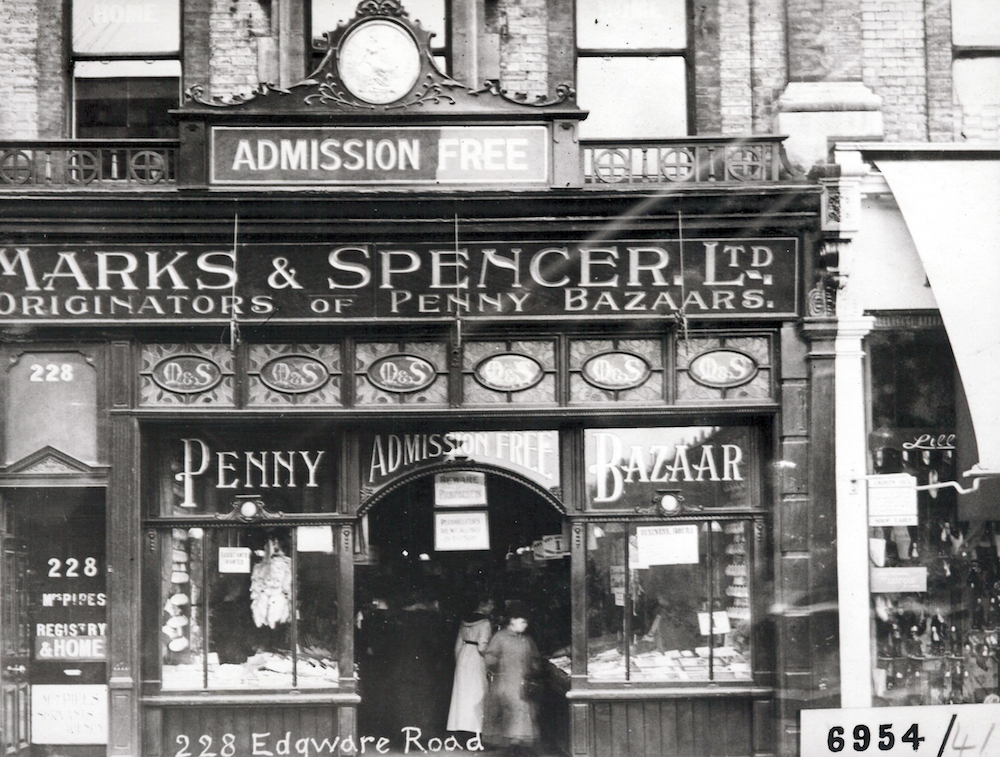 The Penny Bazaar at 228 Edgware Road, 1912, courtesy of The M&S Company Archive

Incendiary bombs hit the store on the night of 10 May 1941, but were bravely dealt with by the fire watchers.

There were lighter moments during the war when it was noted in the Forces Bulletin that a staff member who was usually too weak to carry a box up the stairs moved a fridge to retrieve a penny that had been lost! 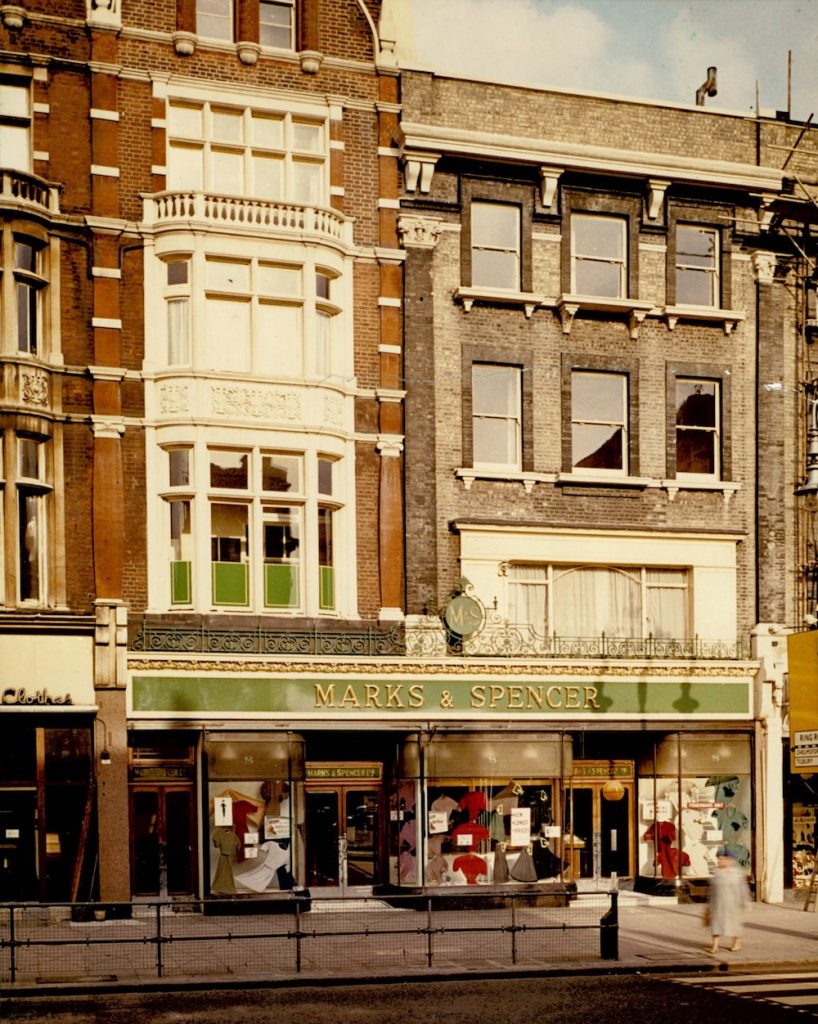 Also in November 1945 it was noted that the porter was buried under a pile of hangers that collapsed as he was trying to stack them – he was unhurt. The store at 228 Edgware Road closed on 24 October 1959.

Within a few days of the closure of the old store, the new store opened at 258/264 Edgware Road on 30 October.  It had an area covering 35,600 square feet and was located below a tower of offices on sixteen floors. At its peak during this period the store would employ 150 staff and quite radically for the time, the store was open all day on Saturdays.

The building of the new Marks & Spencer store on Edgware Road achieved a first for the company with decorated hoardings surrounding the building site. The large panels depicted the company’s 75 year history. A 25ft fibreglass sculpture, “Progression” by Edward Bainbridge Copnall fronted the new store. 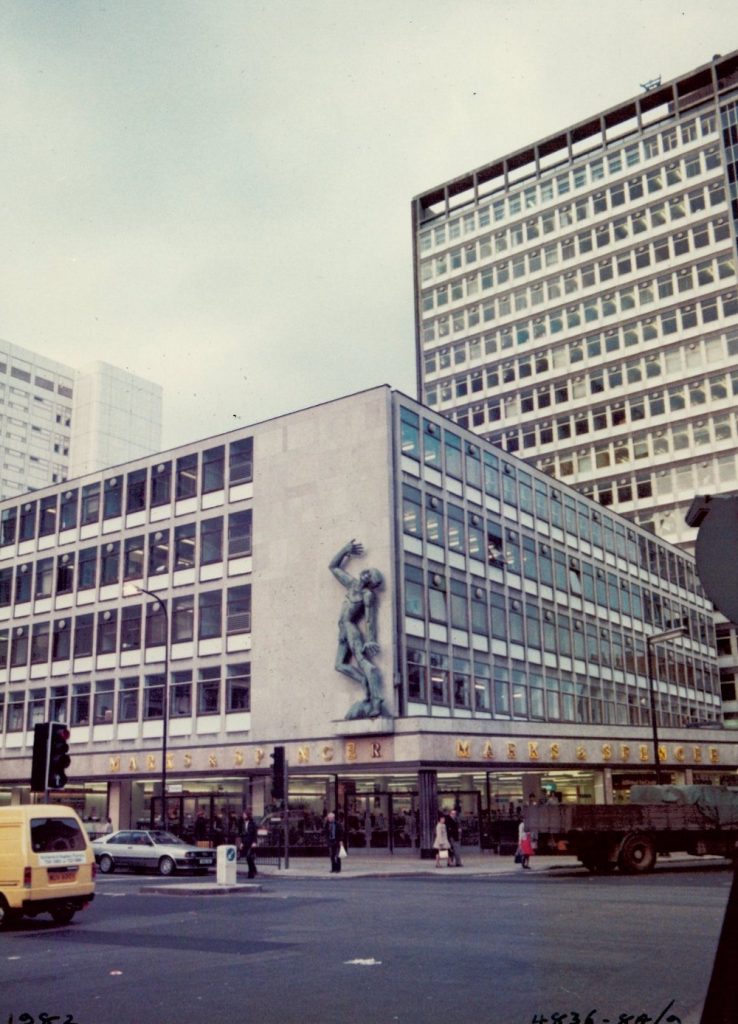 However, in 1988 it had to be removed. An agreement was reached to erect a new statue outside the building’s main entrance on Chapel Street. Allan Sly was commissioned and in 1990 the bronze figure of The Window Cleaner was installed outside Capital House.

The sculptor explains in this little video how he was asked to create something with a “wry quality”. His Window Cleaner gazes up at the many glazed surfaces of the building, scratching his head and apparently wondering how on earth he’s going to clean them all with just a small ladder. This is one of Sly’s earliest public works. A companion piece completed in 1993, The Messenger – a motorcycle courier – stands outside St Mary’s Hospital on South Wharf Road, Paddington.

Marks & Spencer is still operating at 258 Edgware Road today and is open 7 days a week. The store sells clothing and food and has a little cafe serving hot food to go. Find out more here.

With many thanks to the M&S Company Archive. 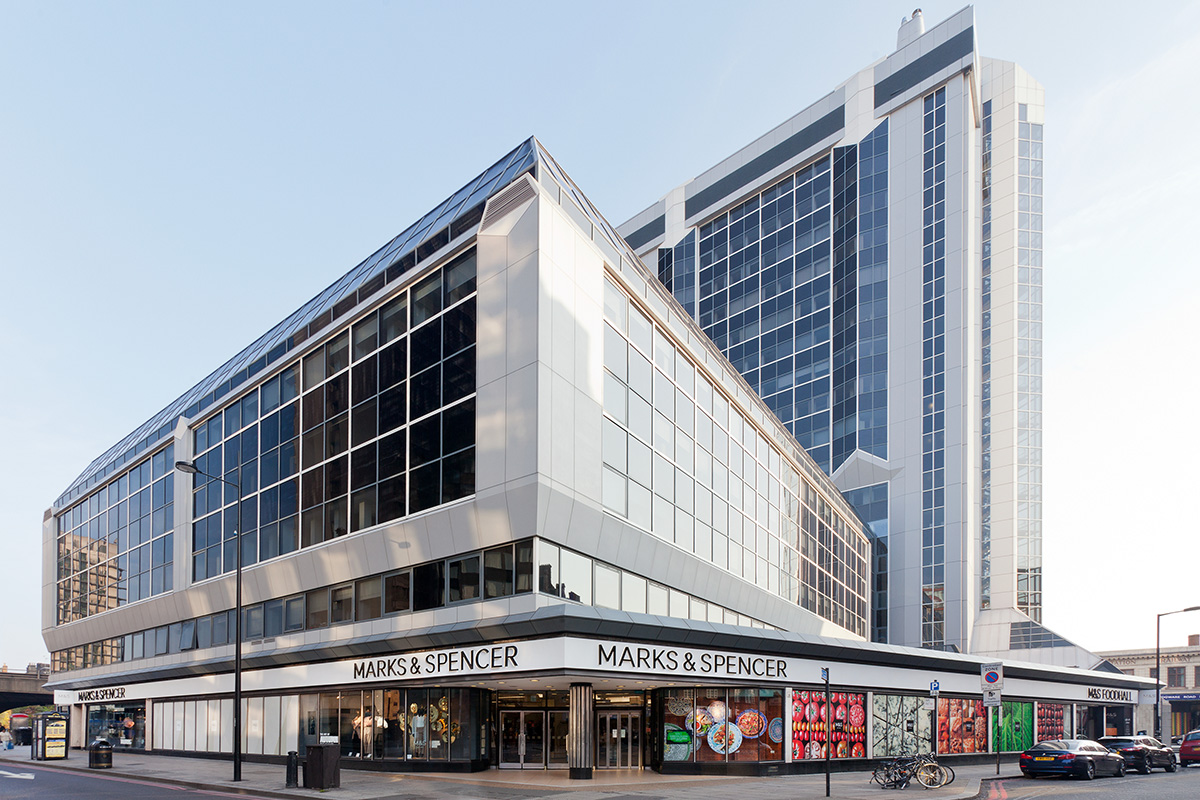