The Nomadic History Of The Tyburn Stone

The nomadic history of the Tyburn Stone tells of a way marker pointing travellers down the Edgware Road to Tyburn and its various homes.

Standing on a wooden pedestal in the slick modern entrance of one of the biggest hotels in London is an incongruous relic of the 18th century. Tyburn Kitchen at the London Hilton Metropole on Edgware Road is home to the Tyburn Stone, a way marker that warned travellers they were just half a mile from the Tyburn Gate and its tollhouse, the gateway into central London.

The Gate or Tyburn Turnpike was erected when the infamous Tyburn Tree gallows were removed the site in 1759.  This became one of the busiest and most profitable turnpikes in London. The British Library has a painting of it from 1813 in its online collection and tells us,

“Lewis Levi, a rich stockbroker paid over £12,000 for the lease of this turnpike. He recouped this investment by charging carriages 10d, horsemen 4d, and 5d for 20 oxen, or 2d for 20 pigs. This turnpike led travellers into Tyburn Road (now Oxford Street)”.

There is a plaque by the stone in its current position but it doesn’t make sense. London memorial website, London Remembers, tells us that it was probably transcribed without thinking from a previous brass plaque affixed to the stone in 1909, when it was installed outside Capital and Counties Bank at number 195 Edgware Road on the corner of Star Street.

The stone disappeared when that building was demolished in 1930 but reappeared in the window of the Lloyds Bank on that site in the 2000s. It remained on display until the branch shut in 2013 when it was relocated to the London Hilton Metropole.

Although it’s now roughly half a mile out of place it remains a fascinating reminder of the area’s history as a gateway to London and an anachronistic oddity for the thousands of visitors who pass it every day. 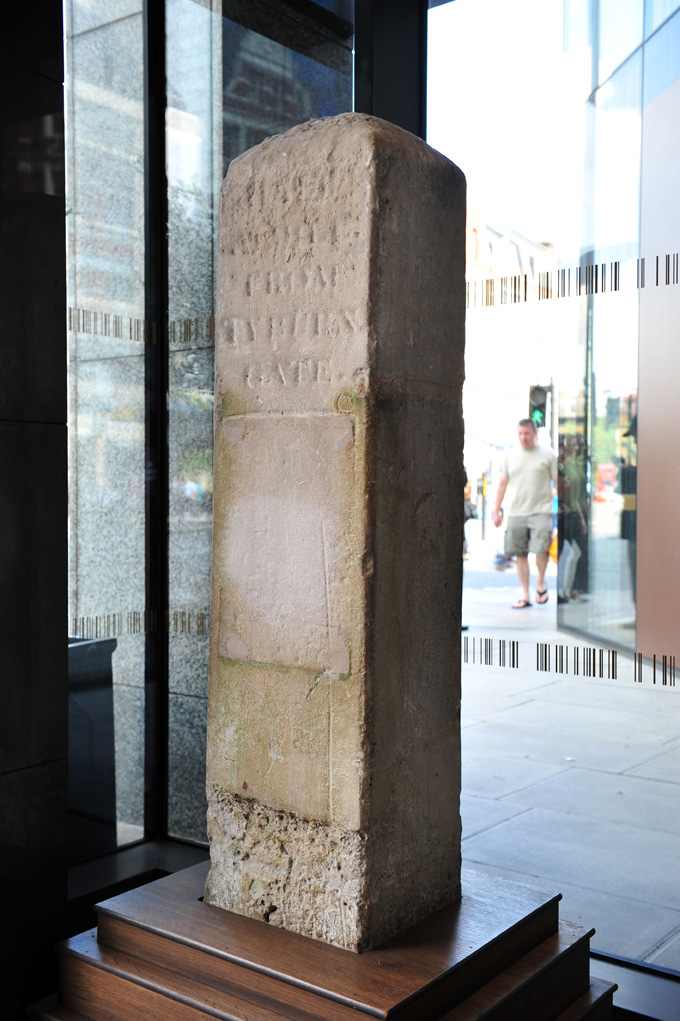