A Deep Dive into Portsea Mews

Take a journey through time with us and discover the history of Portsea Mews, the best kept secret in Connaught Village.

Portsea Mews is a cobbled cul-de-sac that is approached through an entrance under a building on Portsea Place. In a courtyard configuration, the Mews is positioned behind larger properties on Kendal Street, Porchester Place Connaught Street, and Portsea Place. 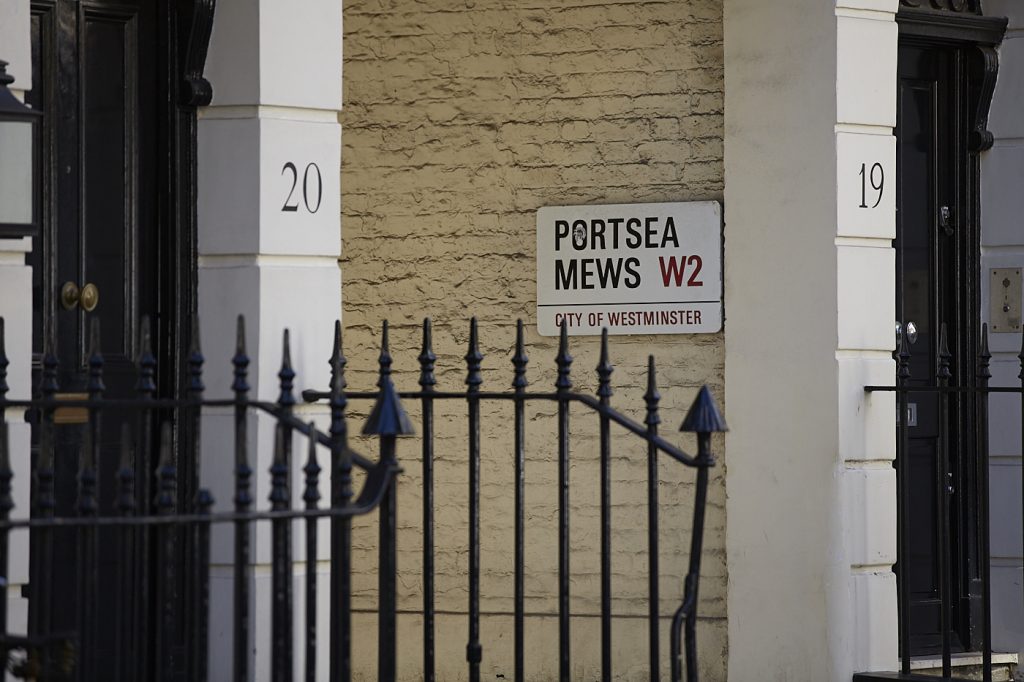 The architectural and historic interest of the Mews derives specifically from its design, external appearance and original purpose. The earliest mews layout can still be seen today and externally, original features remain.

The Mews, the listed and unlisted buildings nearby, the landscape and their relationship to one another and the conservation area collectively illustrate the development of this part of London.

The Humble Beginnings of the Mews House

The word ‘mews’ derives from the French ‘muer’, to moult, reflecting its original function to house the king’s falcons while they moulted. They became known as ‘mews’ after the Royal Mews, gigantic stables on what is now Trafalgar Square.

London’s iconic mews have humble origins as the service roads behind the homes of the well-heeled Georgian and Victorian elites.

When London expanded to the west in the 18th century, squares, crescents and grand terraces of town houses were built on the fields in Mayfair, Kensington, Marylebone and Hyde Park. As wealthy families moved to these exclusive neighbourhoods, they needed space for servants, horses and carriages.

Mews were utilitarian places, with hard-wearing cobbles and a drain down the middle to take away the waste from the horses. In an effort to isolate them visually from main streets, their entrance way was usually via a narrow alleyway inserted through a terrace. The original ‘secondary’ importance of mews (in relation to the main streets and the buildings which they served), is reflected not only in these subtle entrance ways, but also in the smaller scale of their buildings.

The mews buildings were brick fronted and of a simple design. They comprised two floors:

There was often a tunnel under the garden connecting with the basement, so servants could leave the stable without disturbing residents. A curious feature of almost any mews house is that it has no windows at the back, so servants could not spy on residents enjoying a summer evening in their garden.

In the early 20th century the amount of aristocratic families owning these grand terraces declined, leading to mews homes falling into despair as there was no longer any need for them.

Mews also lost their equestrian function when carriages were replaced by motor cars. Accommodation for grooms and coachmen was no longer needed and although some mews were adapted to house chauffeurs and their employer’s cars, most became separate properties and were converted into bijou residences, or sold off to businesses such as taxi firms, garages and print shops. 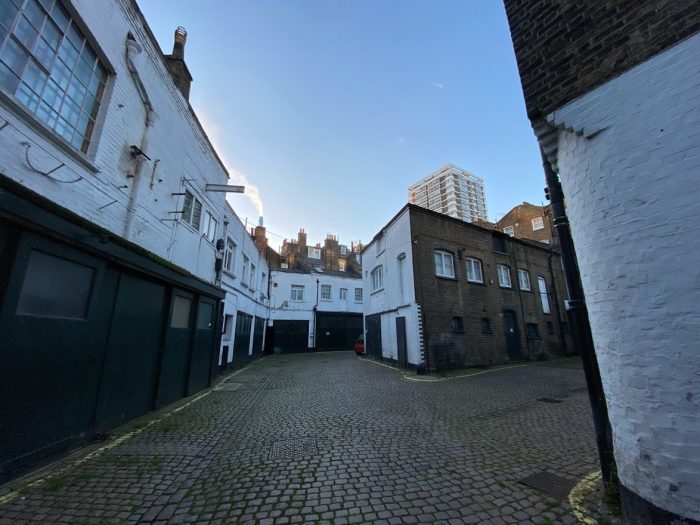 The History of Portsea Mews

Originally named Frederick Mews, Portsea Mews was built on Portsea Place to serve the grand houses of nearby Frederick Square (now Portsea Place) to provide stabling for their horses and carriages. The Mews first appears on the Paddington Estate Map drawn up in 1824 by George Gutch. The map shows the nascent mews buildings behind the new houses on Frederick Street (now Portsea Place).

The current ‘C’ shape we see today, had been established on Gutch’s map of 1828.

The 1842 map shows how the gardens of the houses on the surrounding streets – Cambridge (Kendal Street), Frederick (Portsea Place) and Berkley Street West (Connaught Street) stretch back towards the mews.

The first edition OS survey published in 1862, shows more clearly how the rear closet wings of the surrounding houses have created a densely built-up block relieved only by small courtyards. Frederick Street is now named Portsea Place although the mews still retains its original name. 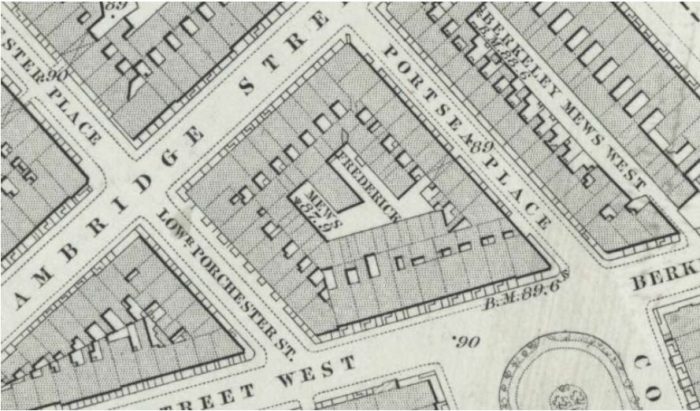 In 1878 the building at the centre of the Mews (today No. 11) was demolished and a new ‘Corn Store’ was erected in its place, on the same footprint.

The 1914 OS map illustrates how some of the individual units have been knocked together to create larger units – for example Nos. 1-3 are now one large unit.

Frederick Mews seems to have changed its names to Portsea Mews in the 1930s.

The 1952 map shows the mews numbered and further consolidation of small units into larger ones. 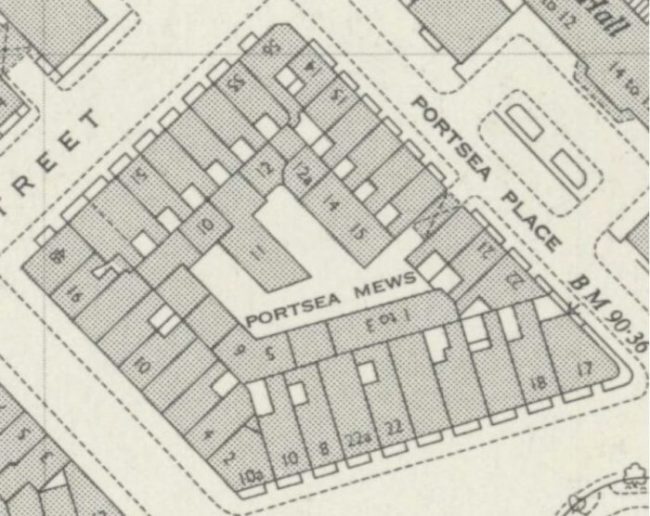 Between 1954 and 2018, the ground floor of the entire mews was used by the family-run business, Handman & Collis, and was said to have been central London’s oldest car repair garage. The rooms in the upper floors were converted into flats for rent.

Handman & Collis moved out on 2 April 2017 and closed down as a business.

The Buildings of Portsea Mews

Portsea Mews is a good example of an original/surviving Mews. Access to the mews is gained via a covered entranceway from Portsea Place which runs beneath the first floor level of No. 20 Portsea Place.

The original mews buildings were only of two stories and this height still prevails, with painted brickwork and roofs hidden behind parapet walls. It has good retention of original mews features including first floor hayloft, door timbers, casement windows, curved brick walls, and cobbles.

The 15, two-storey buildings making up the mews comprise a mixture of commercial and residential uses. These retain some original features externally such as first floor hayloft doors however other features, such as garage doors, have been changed. Inside, the original layouts have been altered both at first floor and ground floor levels.

The occupation for more than 50 years of the ground floor parts of the mews by Hardman and Collis has resulted in many of the original stable/garage doors being replaced in order to create wider entrances.

Archive plans illustrate how some of the mews buildings looked at the beginning of the 20th century. From these it can be seen that the prevailing look to the elevations were tall wooden ‘garage’ doors along with irregularly placed small-paned sash windows and, in some instances, ‘hay loft’ doors. Much of this original design was altered during the course of the 20th century.

With thanks to the Church Commissioners, KM Heritage, and Chapman Architects.

Between WWI and WWII, W. E. Masters designed a series of striking apartment buildings including the often overlooked mansions flats…