A Royal Film Performance of “The Forsyte Saga” film was held at Marble Arch Odeon on 17 November 1949.

King George VI and Queen Elizabeth attended the performance with their daughters, Princesses Elizabeth and Margaret. The royal party were introduced to the stars of the cast.

This British Pathe footage shows the King and Queen meeting and shaking hands with the glamorous cast, including a dashing Errol Flynn. A host of famous film stars and guests from the UK and USA also attended. It was a seriously star-studded event.

This showing of “The Forsyte Saga” was only the fourth Royal Film Performance, an event created by the Cinema & Television Benevolent Fund in 1946.

Now known as the Film and TV charity, this high-profile event showcases a major film premiere and is attended by members of the British Royal Family to this day. The proceeds support people from the UK film and TV industries at  all stages of their careers.

The Royal Film Performance was only held at the Marble Arch Odeon this one time but must have been a truly fitting venue for the occasion. The imposing cinema on the corner of Marble Arch and Edgware Road had a grand canopied entrance, which can be glimpsed at the beginning of the Pathe clip. Inside, the auditorium was lavishly decorated in the ‘Atmospheric’ style, like a Roman temple. The impressive Royal balcony was garlanded with flowers.

Find out more about the Cinematic History of Edgware Road and Marble Arch in this previous article.

With thanks to Cinema Treasures. 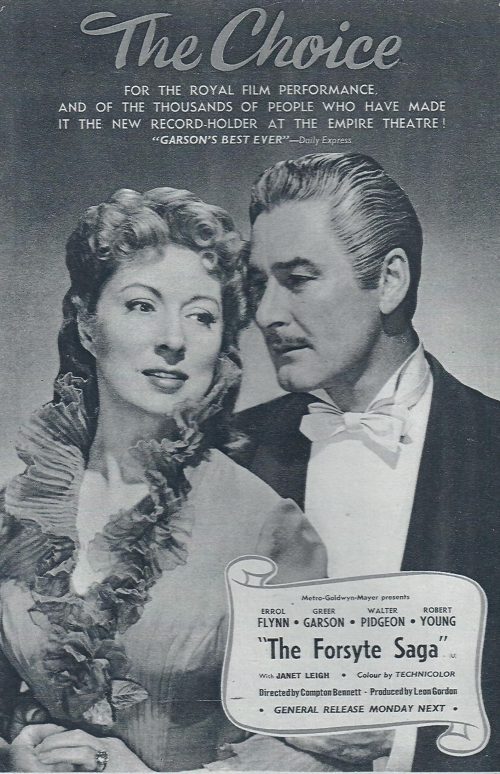 The Cinematic History of Edgware Road

These days, London’s film central is Leicester Square. But back at the start of the 20th century, Edgware Road was…