The Cato Street Conspiracy of 1820 saw police foil a terrorist plot to overthrow the government by assassinating the Prime Minister Lord Liverpool and his Cabinet ministers.

The conspirators met in a stable block in Cato Street, a discreet mews, just off Edgware Road. But what brought them to such drastic measures? 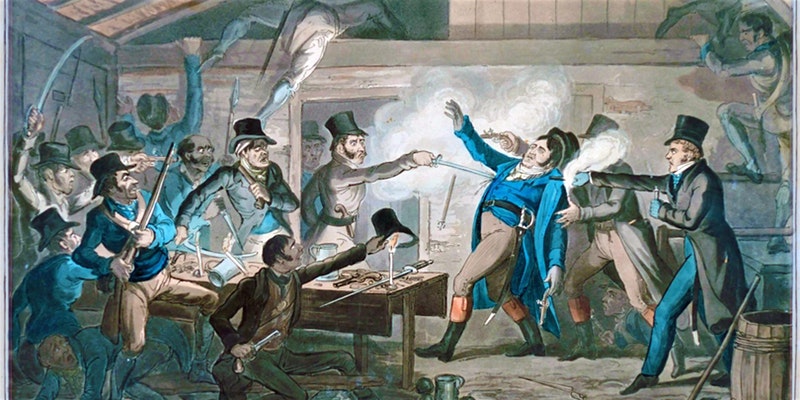 George IV had been on the throne for just a few weeks. England was undergoing vast social, political and cultural change. Rural living was giving way to urbanisation. Rapid industrialisation saw workers flock to the towns and cities. The Napoleonic Wars had come to an end but returning soldiers and sailors saw unemployment rise. The population boomed but poverty, food shortages and poor living and working conditions bred a climate of discontent. Social unrest and radicalism proliferated. A series of riots occurred. The government responded with repressive measures to prevent working men gathering under a common purpose.

London radical Arthur Thistlewood started a small extremist group to protest against these measures. The group of around 40 malcontents met in pubs around London, including the Horse & Groom in Marylebone, to discuss and plot how they would create a more equal society. They had violent ideas.

Their plot was to assassinate the entire Cabinet during a dinner at Lord Harrowby’s home in Mayfair’s Grosvenor Square and proclaim a republic.

However, the group of conspirators was too large to keep the audacious plan secret. An informant alerted the police of the plot and on 23 February 1820 at around 7.30 in the evening stormed the hayloft in Cato Street where the group was meeting and arming itself. A fracas ensued. Thistlewood killed a policeman.

The National Archives report that after his arrest, “one of the conspirators, James Ings, described how the plan was that he would be the first to enter the room at Lord Harrowby’s house, armed with a pair of pistols, a cutlass and a knife. He intended to behead every member of the Cabinet, then take away the heads of Lords Castlereagh and Sidmouth in bags to display them on spikes on Westminster Bridge.”

Today Cato Street is a quiet residential mews, just off Edgware Road. The tiny two-storey Georgian house (formerly a stable block) where the plotters were discovered survives and is marked by an English Heritage blue plaque. 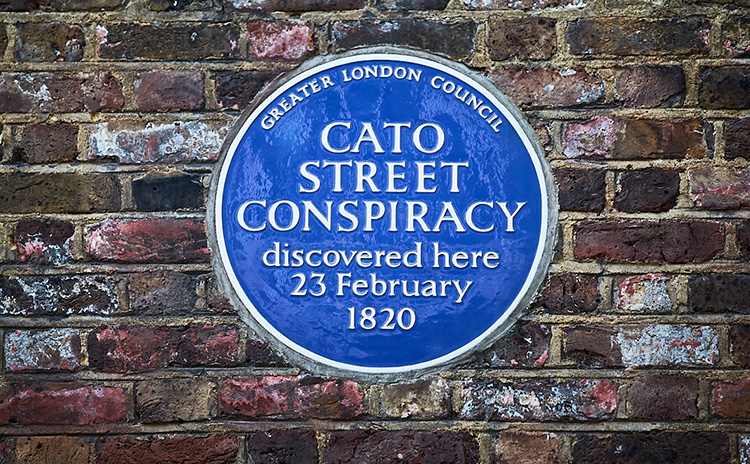