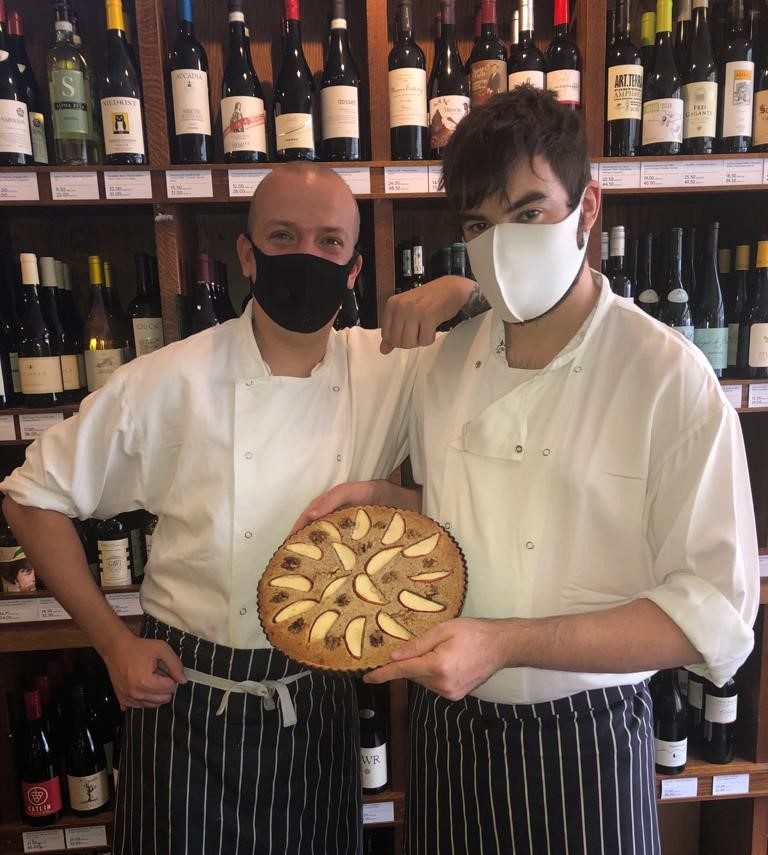 Chef Jesse on the right, with his sous chef Matty, at Vinoteca Marylebone.

1Can you explain your role in one sentence?I’m the Head Chef at Vinoteca Marylebone. The main part of my role is to deliver great food, but there's a lot that goes on behind the scenes to achieve that. I order all the ingredients, check stocks and must ensure we keep waste to a minimum. I also look after our amazing team in the kitchen. I used to write the menus for Vinoteca Marylebone but due to Covid we’re currently offering one menu across all sites to reduce waste.

2How long have you been doing this job?I‘ve been cooking for seven years but I joined Vinoteca two years ago as Chef de Partie. I was promoted to Sous Chef six months later, and then Head Chef six months after that.

3Did you find yourself in this role by accident or by design?I joined the team at Vinoteca by design but I became a chef by accident. I was working as a bartender in Southampton, which is where I'm originally from, but then I was made redundant and had just signed the lease on my first flat when I found a job as a food service assistant in an office building making sandwiches, salads and soups for office workers. I got chatting with the chef who recommended a book by American chef Anthony Bourdain - "Kitchen Confidential: Adventures in the Culinary Underbelly". I then joined a two rosette gastropub and the rest is history as they say.

4What’s the best part about your job?I'm constantly surrounded by great food and drinks, and quite often even better people!

6What do you enjoy doing when you are not at work?During lockdown I volunteered at a vaccination centre at St Charle's Hospital where I cooked for doctors, nurses and volunteers. I also like to cultivate my own mushrooms in my spare room, ferment vinegar and go fishing in Regent's Canal. I usually start at Little Venice and go all the way to Limehouse.

7What do you like about this area?I love its rich history, there's so much to see and do around Marble Arch.

8Where’s your favourite place to go for lunch in the local area?I'm usually working at lunch time, but on my days off you might find me at Meat Liquor. As much as I love fine dining, you can't beat a great burger and beer.

9Who is YOUR hero and what is it about them that inspires you?The very first chef I worked with, making sandwiches and salads, Brad Roe. He pushed me to look for a better job and gave me the inspiration to become a chef. Since then he's been a great source of advice and stability in a difficult industry. He's currently working on the Isle of Wight as the Executive Chef at Ventnor Botanic Garden. He also wrote a vegan cookbook called "Plant Based Cookbook: Simple Vegan Cooking With a Gourmet Twist."

10If you could visit anywhere in the world, where would it be?I'd love to go to New Zealand to do some fishing. But if I had to pick one place it would be Norway. They have "Freedom to Roam" laws, also called "Everyman's Right", which means everyone can walk, camp or fish wherever they like.

Stephanie Segoura, General Manager of the London Marriott Hotel Marble Arch joined us for a special Hidden Heroes interview to…

Rhuaridh is the owner and founder of Buchanans Cheesemongers, an artisan cheesemonger in Connaught Village.