Meet BTP officer Dan, and his explosives search dog Bailey. Between them, they keep London safe. 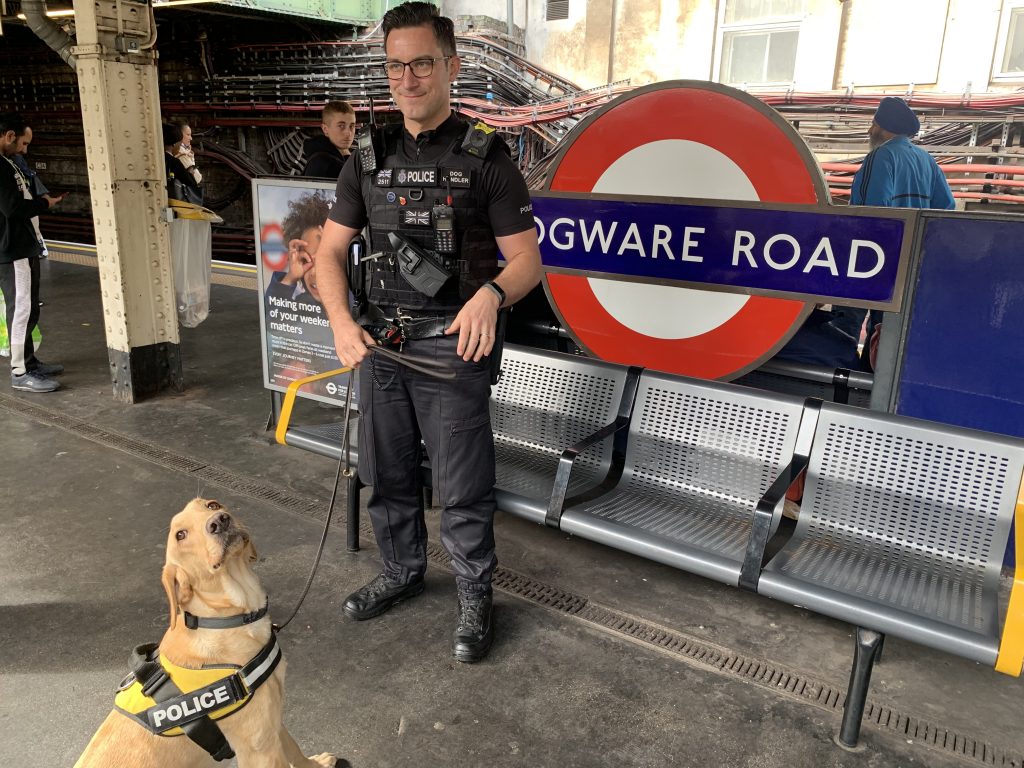 1Can you explain your role?I am an explosives search dog handler, within the Counter Terrorism section of the British Transport Police. Together we conduct day-to-day searches of mainline stations and LU stations, and also carry out sweeps for VIP movements and major events. Bailey often works on Project Servator patrols in the area too – these are unpredictable deployments designed to deter crime and terrorism.

2How long have you been doing this role? And how long have you and Bailey been working together? I have been with the Dog Section a year and had Bailey with me coming up to a year. I was a PC in Essex prior to that. Bailey lives with me, he has his own kennel supplied by BTP.

3Did you find yourself in this role by accident or design?I have always wanted to join the Dog Section, but it’s hard to get into as there are not many vacancies. I got in the second time I applied so was really lucky. People generally stay in this section for many years, until they retire, it’s very popular as a career path.


4What’s the best part about your role? Which bit of the job does Bailey like most?The best part is being able to watch Bailey develop, from his training to maturity. Bailey’s motivation is the tennis ball – that’s how we reward him. He gets through about 30-40 tennis balls a year, we have a big store of tennis balls at HQ, some are donated by Wimbledon!


5What’s the strangest thing that has ever happened to you in your role? Occasionally we get called to suspect items, which can be very tense, as we sweep evacuation areas. Luckily, Bailey has always checked them out to be okay and we’d always encourage anyone to report any concerns to us. A colleague was once called to a suspicious vehicle which turned out to be a Maserati test car with a GPS tracker attached!


6What do you enjoy doing when you are not patrolling the transport network?I am doing a lot of work on my house, so DIY take up many of my rest days. On Bailey’s rest days we go for long walks, off the lead, across fields. Bailey knows when he’s working the minute he sees me in the morning, if I am in uniform he knows he’s on duty.


7What does Bailey do to unwind, does he have a favourite park? Or snack?Obviously he loves his tennis balls, but he’s also partial to chasing the odd squirrel on our long walks. DentaStix are his favourite snacks.


8Does Bailey have a hero? And do you have a favourite station?Bailey’s hero is me, of course! We do cover Eurostar and we love St Pancras. Favourite underground station? I’d have to say Edgware Road, I worked in this area for a while.


9If you could visit anywhere in the world, where would it be? I’d love to visit Machu Picchu and do the Inca Trail. Sadly Bailey wouldn’t be allowed to come!

Ali is a member of the Marble Arch London Street Team, which patrols the area helping businesses and employees, as…

Jane is the Area Manager for Edgware Road Tube Station (Circle, District and Hammersmith & City lines), as well as…

Paul is the Building Manager at Capital House on Chapel Street, the 16-storey office building next to Edgware Road station.…