Marble Arch joined 30 London landmarks, including Tower Bridge, the Gherkin and the London Eye, in lighting up purple on Monday 23 May 2022 to mark the opening of the Elizabeth line. 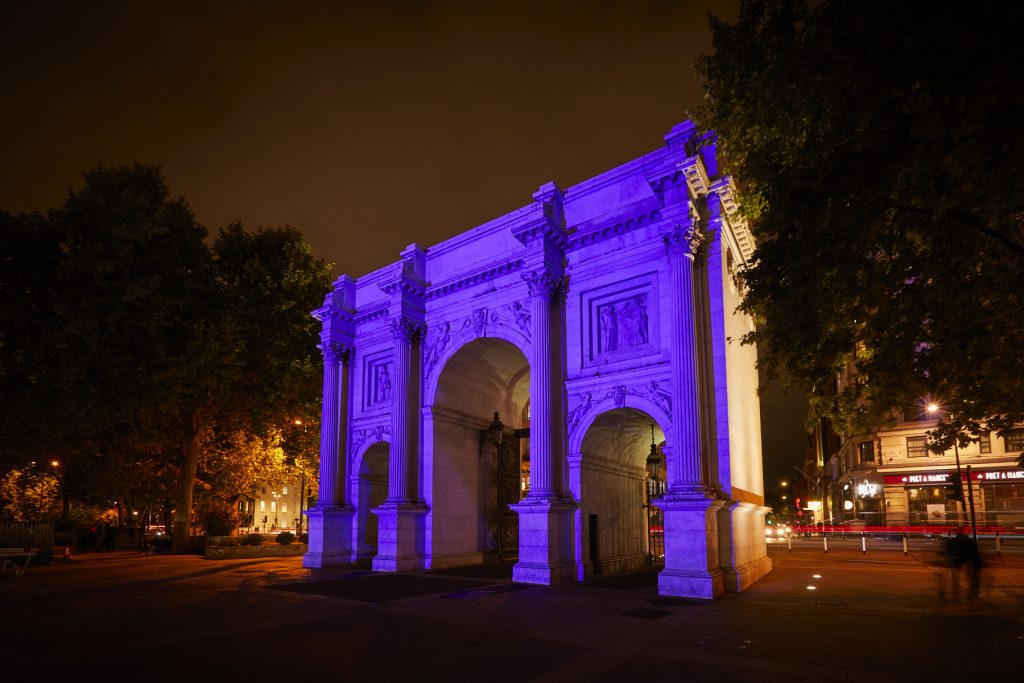 The Elizabeth Line took its first journey at 6.30am on 24 May from Abbey Wood and at 6.33am from Paddington. The railway will now operate 12 trains per hour between Paddington and Abbey Wood from Monday to Saturday 6.30am to 11pm. Work will continue in engineering hours and on Sundays to allow a series of testing and software updates in preparation for more intensive services from the autumn.

A fleet of 70 200-metre long spacious, walk-through trains will run, with each train carrying 1,500 passengers. Three sets of double doors per carriage enable easy boarding, with platform doors Jubilee-line style. All 41 stations are step-free to platform level and can accommodate an additional two carriages per train.

For many commuters the Elizabeth line will reduce journey times considerably:

Initially the Elizabeth Line will operate as three separate lines, with passengers changing at Paddington and Liverpool Street. Bond Street is expected to open approximately three months later. The central section will cover Paddington to Abbey Wood. Later in 2022 services from Reading and Heathrow will operate through to Abbey Wood. Services from Shenfield will operate through to Paddington. There will be 24 trains per hour in the section between Paddington and Whitechapel at peak time. The third and final stage will see a fully integrated railway and timetable, across the entire Elizabeth Line. This will be no later than May 2023.

The opening of the Elizabeth line is a once in a generation moment for the capital and it is fantastic to see so many famous landmarks across our city lit up in purple in celebration of this historic day. The new line will revolutionise travel in our city and across the south east and bring significant economic benefits to the whole country.

On 6 February 2022 Her Majesty The Queen became the first British Monarch to celebrate a Platinum Jubilee, marking 70…

The National Garden Scheme, Open Garden, will return to the UK on Saturday 11 June 2022 and five completely unseen…

Marble Arch, the world-renowned landmark, is hosting an illumination of Claire Luxton’s ‘Metamorphosis’ artwork as part of Inside Out Festival,…