Westminster Council unveiled plans to transform Oxford Circus last month, with the creation of two pedestrian piazzas. In partnership with The Crown Estate, the City Council confirmed that work will begin later this year, following an international design competition led by the Royal Institute of British Architects (RIBA).

The two new piazzas will be delivered by the end of 2021, using an Experimental Traffic Order, and will create two pedestrian zones to the east and west of Oxford Circus. Additional planting and seating will offer users of the new spaces opportunities to pause, relax and fully appreciate the stunning setting created by the architecture of the Circus. 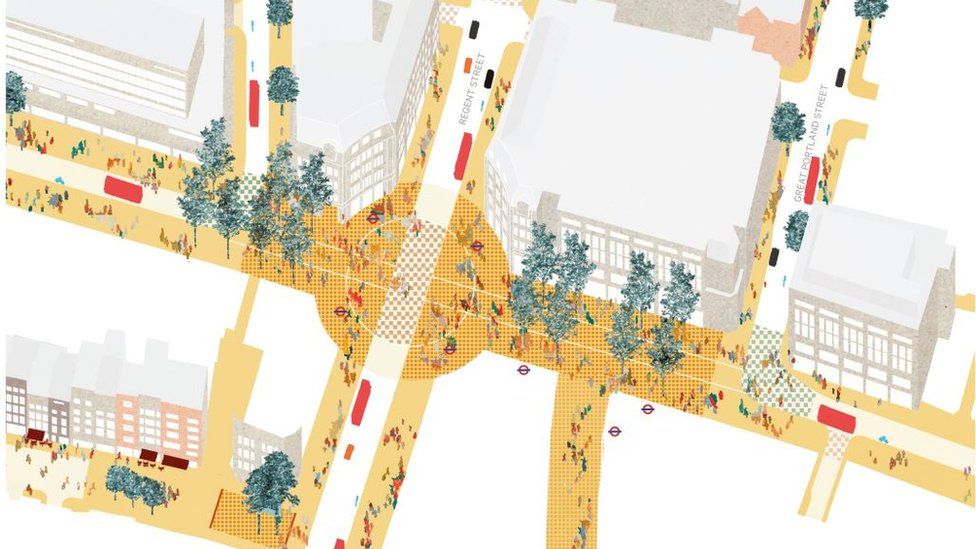 These new bold plans to reinvent Oxford Circus will see the first significant redesign of the nation’s favourite high street in decades. We hope the creation of these pedestrian-only piazzas at Oxford Circus, surrounded by newly planted trees and large seating areas, will instil much needed confidence in the West End and support local businesses severely affected by the pandemic. We want to bring the excitement and buzz back to these famous streets and make Oxford Circus London’s front door.

There is an urgent need to tackle issues with pedestrian congestion and safety, poor air quality and noise. The serious congestion of Oxford Circus, of people and of traffic, is unsustainable and demands action. In the aftermath of the pandemic, and with the arrival of the Elizabeth Line, there is an overwhelming need and a compelling opportunity to build back better; a business-as-usual approach will no longer work. We hope the creation of these pedestrian-only piazzas at Oxford Circus will not only improve safety, security, accessibility and but create an iconic destination at the heart of London.

The proposals are the next step in the City Council’s vision to revive Oxford Street, the nation’s best-known high street, with a commitment of £150 million. Significant improvements to the space, accompanied by Transport for London’s commitment to improve access to Oxford Circus underground station, will prioritise pedestrians over vehicles, improve air quality and deliver a world-class visitor experience.

To see the proposals in detail, check new bus routes and see the overall phasing you can download the full details here.

Westminster City Council and Transport for London (TfL) have today commenced consultation on the future of Oxford Street. This is…

Tickets to climb the Marble Arch Mound, London’s newest outdoor attraction, are now on sale from 26 July 2021 until…