On 6 February 2022 Her Majesty The Queen became the first British Monarch to celebrate a Platinum Jubilee, marking 70 years of service to the people of the United Kingdom, the Realms and the Commonwealth. To celebrate this unprecedented anniversary, events and initiatives will take place throughout the year, culminating in a four day UK bank holiday weekend from Thursday 2 to Sunday 5 June.

The four days of celebrations will include public events and community activities, as well as national moments of reflection on The Queen’s 70 years of service. We’ve rounded up all the local Jubilee celebrations taking place near Marble Arch and Edgware Road, as well as the official Platinum Jubilee weekend events, including where you can see the Queen’s Birthday Parade.

Merchant Square Paddington is marking the celebration of the Queen’s Platinum Jubilee with a Garden Party on Wednesday 25 May from 5-8pm.

Alfresco tipples will flow throughout the evening including Pimms, G&T’s, and Nyetimber which you can enjoy on a deckchair or bean bag while soaking in the views of the canal. Street food trucks will also be at your finger tips, as well as a huge variation of chocolate goodies served by Hotel Chocolat’s Chocmobile!

There will also be giant garden games, all free to play, including Jenga, Connect Four, and Chess. 1940’s Trio The Bombshells will bring a mix of old time classics and present day hits that will make your feet want to move. 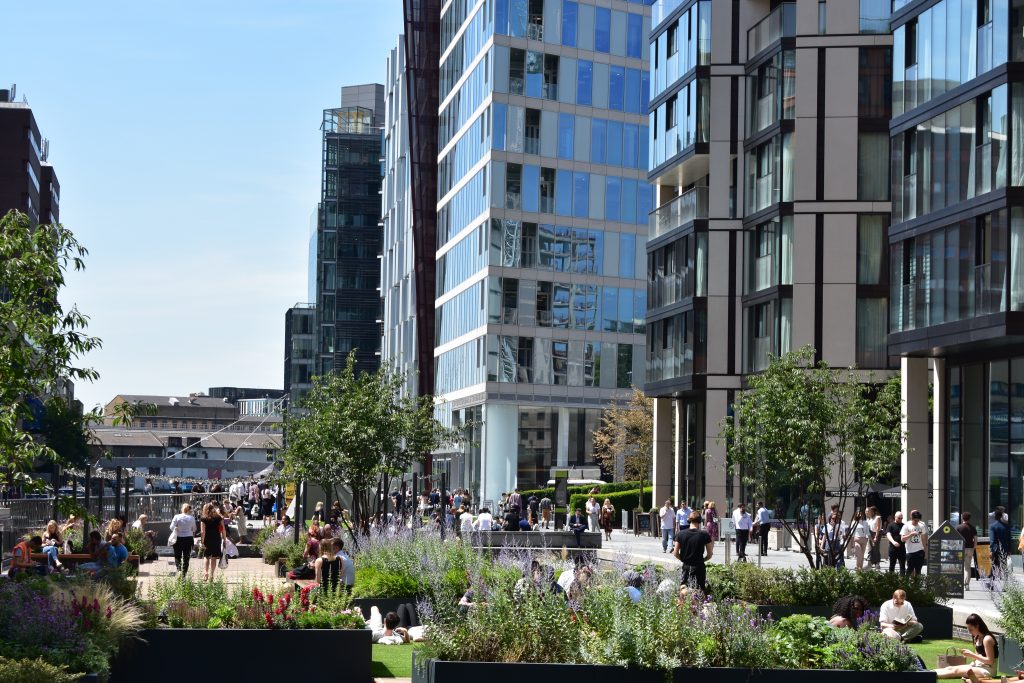 More than 1,400 parading soldiers, 200 horses and 400 musicians will come together in the traditional Parade to mark The Queen’s official birthday, usually held on the second Saturday in June.

Tickets for seated stands around Horse Guards Parade are allocated by ballot, which closed on 7 March 2022, however a limited view can be obtained by standing on The Mall or on the edge of St James’s Park overlooking Horse Guards from 9am (the view may be somewhat obscured by troops in this position). These public vantage points are indicated on the map with black dotted lines.

The Queen’s Birthday Parade will also be broadcast live on the BBC in the UK on 2 June 2022. 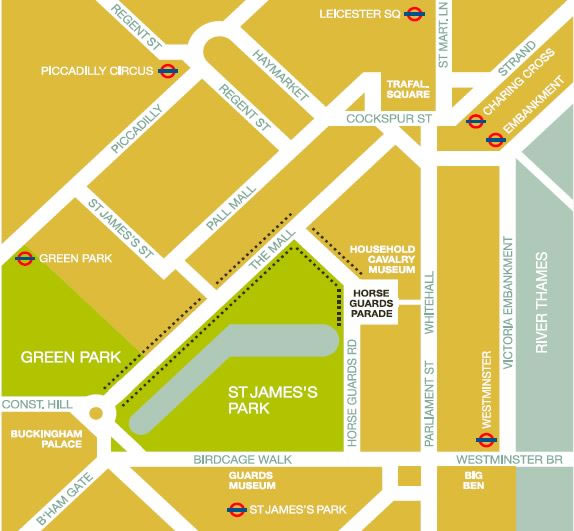 Popular gastropub The Larrik is hosting a family-friendly street party in celebration of Her Majesty The Queen’s Platinum Jubilee on Thursday 2 June from 12-4pm on Shouldham Street. You can expect a traditional street party with bunting, cake, sandwiches, and snacks. The street will be closed to traffic and locals are invited to attend the event. If you would like to join, bring some treats and join the party! 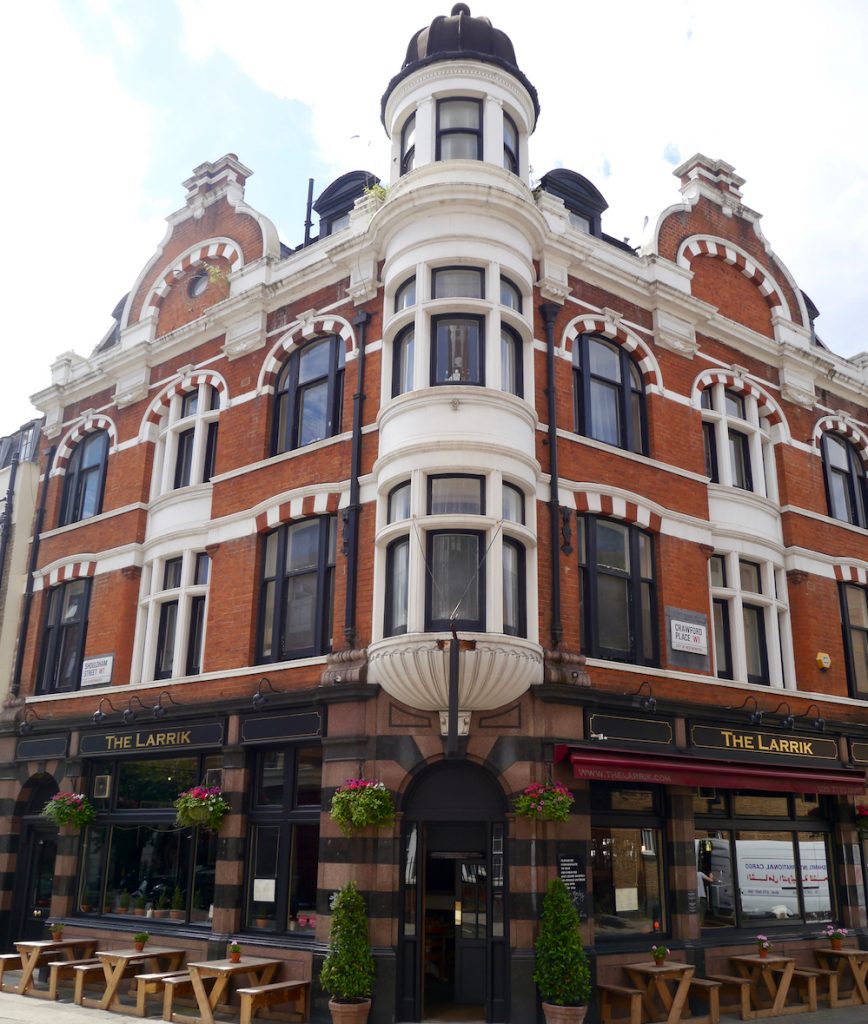 Celebrating the historic occasion in true Mayfair style, the theme for the Mayfair Jubilee Street Party is ‘Let’s Go Fly a Kite’, drawing inspiration from the fanciful aesthetic of Mary Poppins and of picture-perfect summer fêtes from years gone by. The nostalgic set-up will include a curated communal table for 300 people, where everyone is invited to take a seat.

The 200ft banqueting table, curated by sisters Jemima and Alice Herbert, co-founders of Lay London, will see a kaleidoscope of wild flowers reminiscent of countryside hedgerows, charming herb gardens and scent-filled rose bushes, all designed by The Lucas Studio. Flowers will include the celebrated ‘Queen Elizabeth rose’ and, drawing inspiration from the palaces of the British Royal Family, the table will be adorned with topiary trees manicured in different designs to add height and grandeur to this street party table like no other. 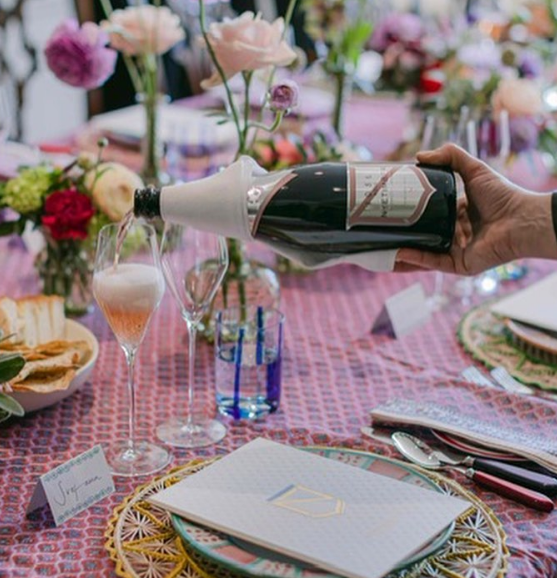 St Paul’s will hold a historic Service of Thanksgiving for The Queen’s reign Friday 3 June at 11.30am. Great Paul, the largest church bell in the country, will be rung for the Service between 10.50am to 10.55am followed by a peal of bells.

The Service will include bible readings, anthems, prayers and congregational hymns, expressing thankfulness for The Queen’s reign, faith and service; desire to foster unity and peace amongst all peoples; and commitment to care for God’s creation.

The Service will include a new Anthem by Judith Weir, Master of The Queen’s Music, that sets to music words from the third Chapter of the Book of Proverbs.

Informal family-friendly street party organised by the Hyde Park Estate Association. Bathurst Mews will be closed to traffic from 12-10pm on Friday 3 June but the party will start at 2pm. Free to attend, everyone is welcome! 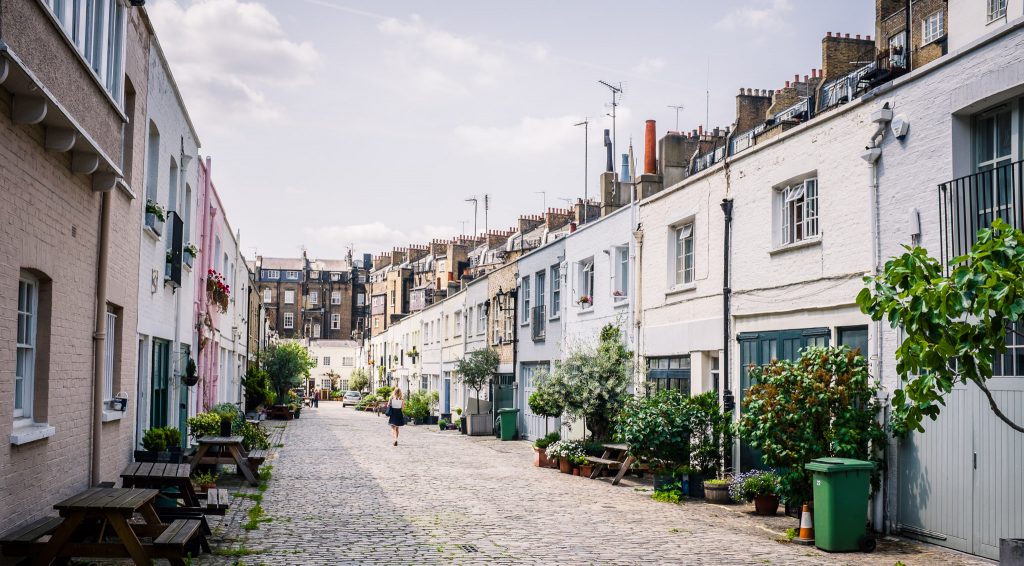 Broadcast live on BBC One, BBC iPlayer from 8pm to 10.30pm and supported across the entire BBC network, the Platinum Party at the Palace on Saturday 4 June, will bring together the world’s biggest entertainers to perform in front of Her Majesty The Queen at Buckingham Palace. Hosts Kirsty Young and Roman Kemp will lead live coverage of the Platinum Party at the Palace.

With state-of-the-art technology and a stunning stage design, the event will feature an incredible range of highlights from global music stars with a full, live orchestra – to actors from film, TV and the stage telling the story and celebrating some of the most significant cultural moments from The Queen’s seven decade reign.

The biggest names from across the BBC will also host a variety of programmes celebrating The Queen’s extraordinary 70-year reign, including documentary The Crown Jewels presented by Clive Myrie and The Queens Jubilee Pudding: 70 Years in the Baking with Mary Berry. 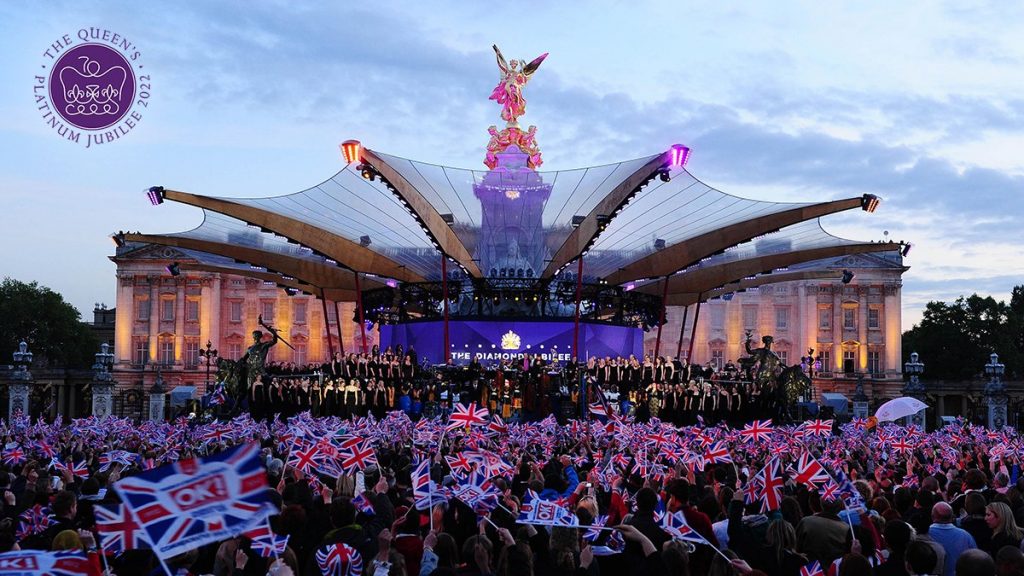 The Harrowby and District Residents Association (HDRA) is hosting a street party in celebration of Her Majesty The Queen’s Platinum Jubilee on Sunday 5 June from 12.30-2.30pm in Molyneux Street. The party will be very traditional with bunting criss-crossing the street, a jubilee cake and plenty to eat and drink.

Marble Arch BID and other local businesses are sponsoring the party which will be a great way to celebrate the Queen’s historic achievement of reigning for 70 years.

There will be sandwiches, snacks and refreshments and people living in the streets in the HDRA area are all warmly invited to attend the event. The street will be closed to traffic so that a large marquee tent can be erected to ensure everyone is dry if it is a rainy day.

It promises to be a fun day with good food and great company. It will be the first public event HDRA has organised since lockdown and a wonderful chance for neighbours to meet up.

If you would like to attend then please email Lucy for further details and to register your attendance.

Come along on Sunday 5 June from 1-3pm for an old-fashioned street party lunch outside of St Mary’s Church to celebrate the Queen’s Platinum Jubilee. There will be a live band, craft activities for children and face painting. Please bring some kind of sharing food with you to add to the buffet e.g. sandwiches, cakes, crisps, fruit, vegetable sticks.

The street party will be held on the Piazza outside of St Mary’s Church, W1H 1PP. Everyone is welcome! For more information or to get involved with the  preparations for the day, please contact Hannah at the church office. 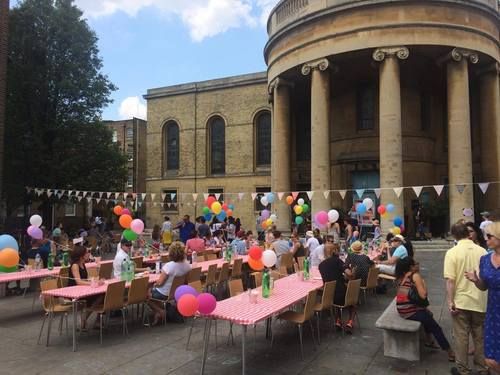 The Pageant will wind its way through the streets surrounding Buckingham Palace, consisting of artistic performers, dancers, musicians, military personnel, key workers, and volunteers, all coming together in a theatrical extravaganza to tell the story of The Queen’s 70-year reign.  Screens in the Park will relay the activities to attendees, and food and drink facilities will be made available to Park users.

​The Gold State Carriage, led by The Sovereign’s Escort, will lead the Platinum Jubilee Pageant, embracing the latest in digital technology to evoke the excitement and majesty of her journey to be crowned 70 years ago. More details will be provided at a later date and while The Queen won’t personally travel in the regal Gold State Carriage, there will be a fabulous surprise.

The Pageant, which starts at 2.30pm and finishes with a finale at the Queen Victoria Memorial ending at 5pm, will serve as an opportunity to gather and pay tribute to Her Majesty. It will culminate with the singing of the National Anthem, ‘God Save the Queen’ and a gospel choir to the sounds of the Band of Her Majesty’s Royal Marines.

The Pageant will bring to life iconic moments from The Queen’s reign as well as showcasing our changing society over the past 70 years. 10,000 people are involved, including the military, over 6,000 volunteers, performers, key workers and 2,500 members of the general public. 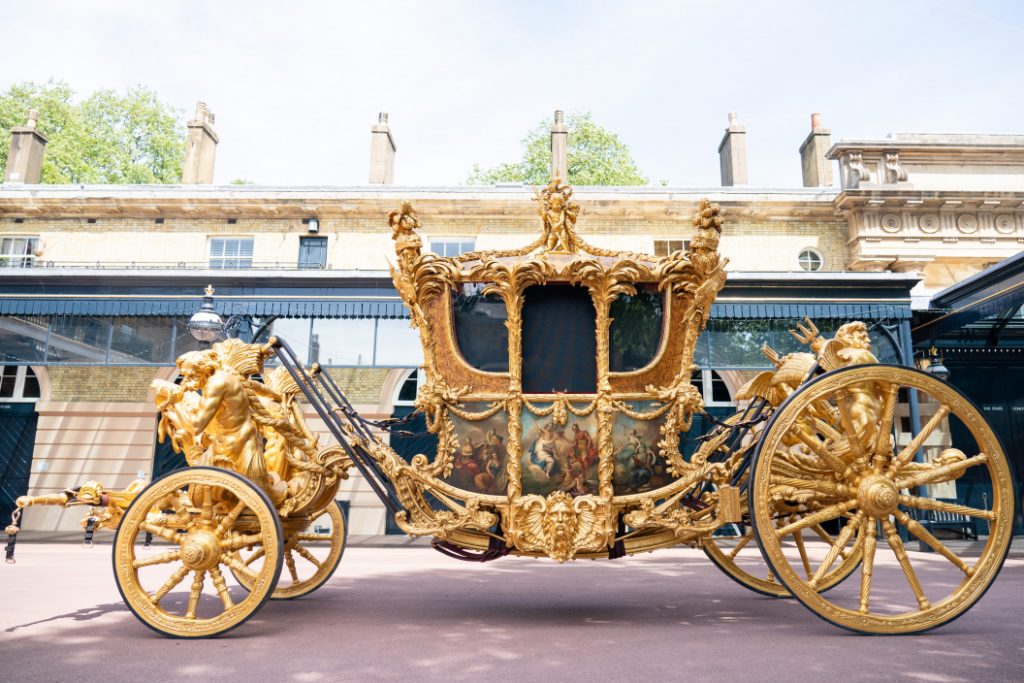 Over 60,000 people have registered to host Big Jubilee Lunches on the Platinum celebration weekend, with events ranging from world record attempts for the longest street party to back garden BBQ’s and everything in between. Over ten million people across the UK are expected to be joining the celebrations to share friendship, food and fun at Big Jubilee Lunches as part of this nationwide act of community friendship.

thebigjubileelunch.com is still accepting orders for free packs to get street parties started or for people to find out where a public event in their area may be taking place. 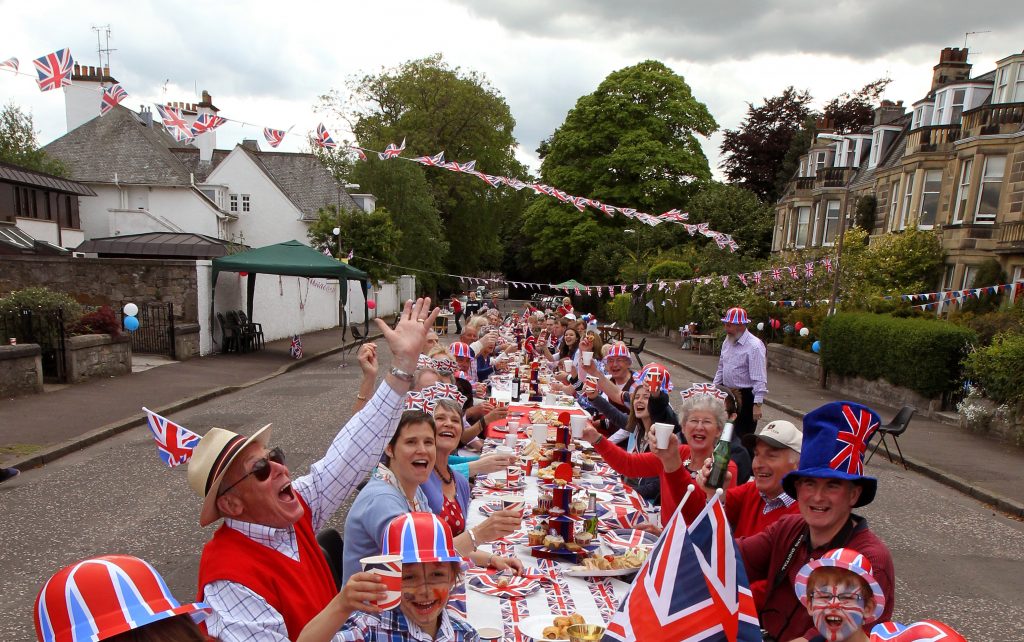 Come celebrate the Platinum Jubilee of her Majesty the Queen on Saturday 11 June from 3-8 pm, in Gloucester Square Gardens W2 2SY.

Join the Hyde Park Estate Association, who are also celebrating their very own 70th anniversary, for a day of family fun events including food, wine and beer, a jazz band, and a tarot card reading tent. Or just come and relax in a deck chair with a glass of wine in the lovely Gloucester Square Gardens. Tickets are £10 per adult via Eventbrite, £15 at the gate. Children go free. 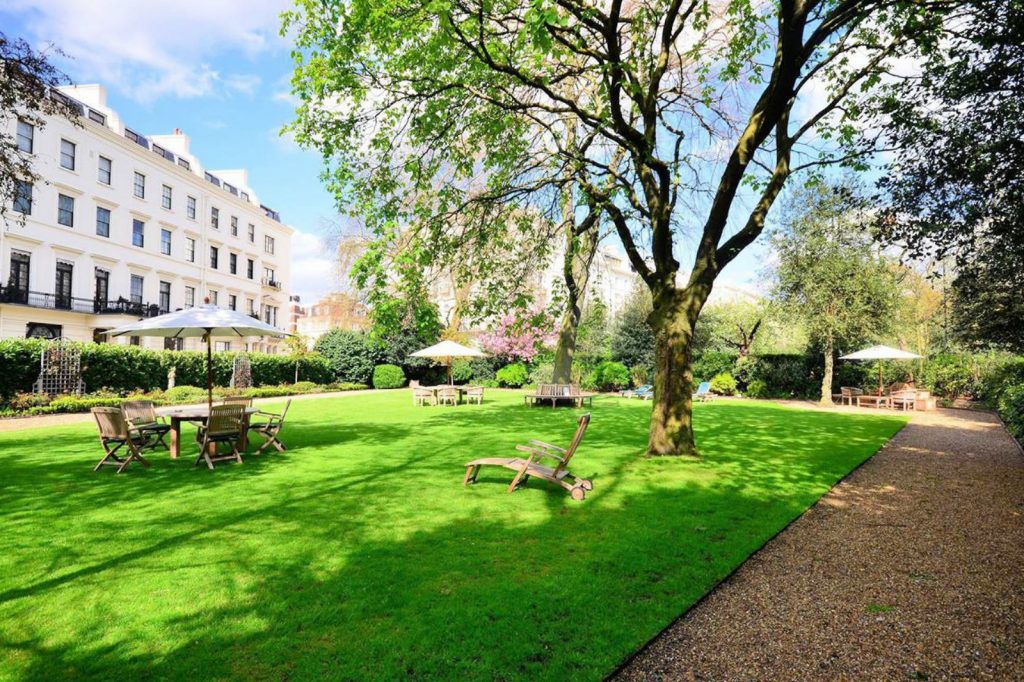 The National Garden Scheme, Open Garden, will return to the UK on Saturday 11 June 2022 and five completely unseen…

Reclaim your lunch hour with a whistle-stop epicurean expedition on Seymour Place, as part of the Marylebone Food Festival. For only…