Marble Arch London BID partnered with the National Portrait Gallery and Art of London, supported by English Heritage and Westminster City Council, to light up Marble Arch. The National Portrait Gallery selected six portraits of Queen Elizabeth II from its collection which were projected onto Marble Arch. These included Dorothy Wilding’s portraits of the Queen ahead of her wedding day in 1947, and shortly after she acceded to the throne in 1952 following the death of her father King George VI. The gallery of images also featured Pietro Annigoni’s 1969 painting of the Queen in full regal robes, while Michael Leonard’s 1985 portrait captures the Queen’s passion for animals, and in particular, her well known love of Corgis. The final image was David Bailey’s 2014 portrait, which was originally commissioned by The GREAT Britain & Northern Ireland campaign, the UK’s international marketing campaign, to celebrate the Queen’s 88th birthday and captures the modern-day Queen just before she became Britain’s longest reigning monarch.

The relationship between Marble Arch and the Royal Family dates back to the monument’s commissioning in 1828 where King George IV selected architect John Nash’s design for a grandiose gateway for Buckingham Palace and to celebrate British victories in the Napoleonic Wars. Despite being moved from Buckingham Palace to its current location in the early 1850s, Marble Arch has hosted numerous royal processions including Queen Elizabeth II’s own coronation procession in 1953.

Marble Arch and the Royal Family have a long and unique relationship, from the monument’s original creation to it being a central part of Queen Elizabeth II’s Coronation, it has been at the forefront of countless Royal and national events. We therefore thought of no better tribute than using Marble Arch to honour the Queen’s Platinum Jubilee and we are delighted to have such supportive and enthusiastic partners including the National Portrait Gallery, Art of London and the custodians of Marble Arch, English Heritage, to make this amazing illumination possible.

Queen Elizabeth II’s 70-year reign has seen the transformation of London from a city still recovering from the aftermath of World War II to a vibrant, international city which attracts visitors from around the globe. Many of these visitors take in Marble Arch during their time in London to learn more about the monument’s history and its relationship with the Royal Family and we are looking forward to welcoming those who come to visit the landmark during the Jubilee celebration weekend. 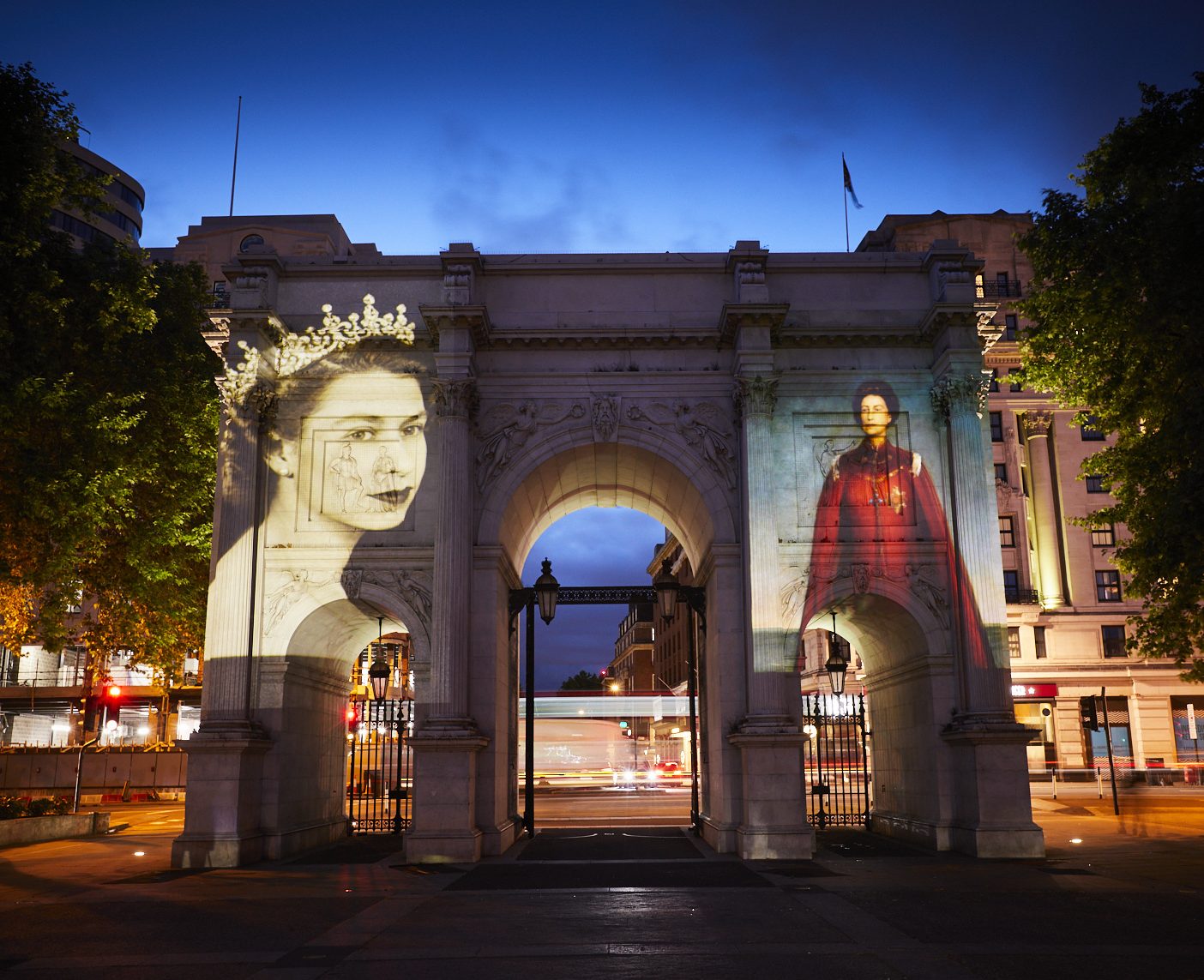 The National Portrait Gallery is home to the largest collection of portraits in the world, and over a thousand of those images depict Her Majesty The Queen. While our building is closed as the Gallery undergoes a major transformation, and on the occasion of Her Majesty’s Platinum Jubilee, we are delighted to be bringing some of the most iconic portraits spanning the Queen’s unprecedented 70-year reign into such a prominent public space.

We’re proud to help mark Her Majesty Queen Elizabeth II’s historic reign and this wonderful illumination showcases some of her most famous portraits, instantly making world-class artwork accessible for millions of people. We hope the royal projection also inspires people to visit the National Portrait Gallery when it reopens in 2023.

As the charity which cares for Marble Arch, along with eight other important London monuments and over 400 historic buildings across England, English Heritage is delighted to support this initiative. The Platinum Jubilee is an historic moment, and these images look triumphant projected against the marble of John Nash’s impressive arch.

I am delighted to welcome this creative initiative to Westminster. Marble Arch has played a significant and symbolic role in Royal history and displaying iconic images of Her Majesty the Queen on the monument is a terrific way to kick off the Platinum Jubilee celebrations in Westminster.