Up close and personal with Edgware Road’s Trees

As the eyes of the world are on COP26 and we think about our own role in tackling climate change, 190 world leaders will consider measures to address and stem rising temperatures and how to reduce carbon emissions. The UK government has set a target to reach carbon net zero by 2050. One of the major topics on the climate change agenda is that of carbon capture, removing CO2 from the atmosphere. Carbon net zero means removing as much carbon as we’re producing.

This is where trees come in. While they are by no means the only answer, trees are nature’s very own tool for carbon capture. They absorb atmospheric carbon through photosynthesis and lock it in for centuries. Trees essentially ‘sequester’ the carbon, using it as food. The CO2 becomes part of the tree itself and is stored as wood.

A mature tree absorbs carbon dioxide at a rate of 48 pounds per year. In one year, an acre (15 tennis courts) of forest can absorb twice the CO2 produced by an average car’s annual mileage. Different tree species have different carbon capture capabilities, you can check here.

Trees are the gifts that keep on giving. They also prevent flooding, bring down city temperatures, reduce pollution, keep soils nutrient rich, promote biodiversity and contribute to our sense of wellbeing. In the UK the value of trees for flood protection alone is estimated to be £6.5 billion, and £6.1 billion for urban cooling. London has 8 million trees covering about 21% of the total land area. Although much of this area is made up of extensive green spaces like Epping Forest and The Royal Parks, London also has a great tradition of having tree lined streets and any elevated view of London emphasises the point that London is really a wonderful urban forest. 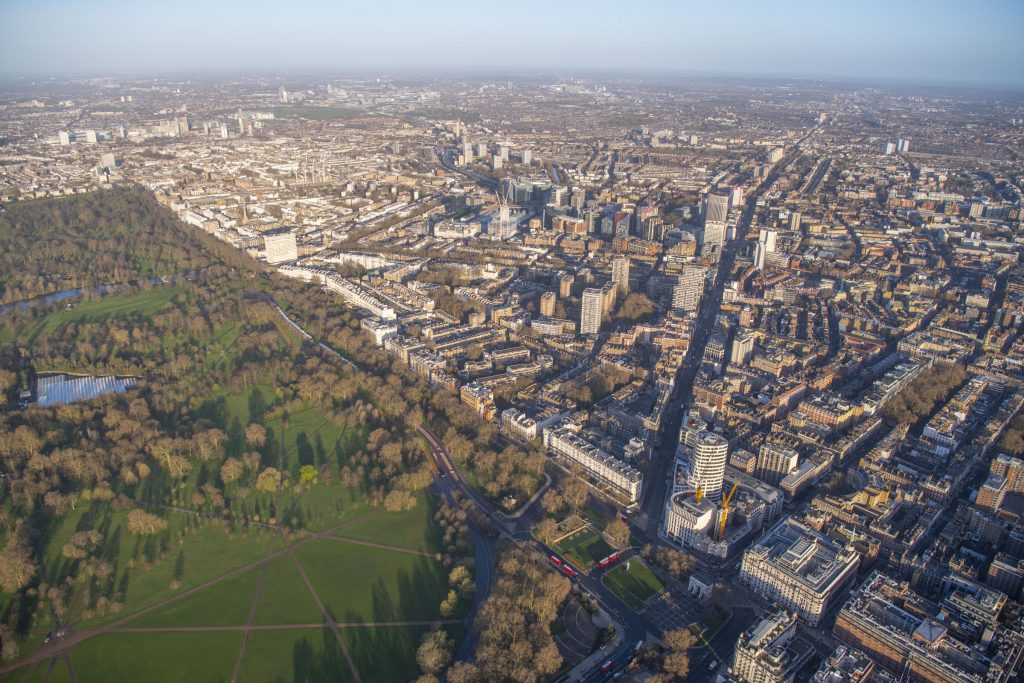 The BID frequently receives comments about a lack of trees on Edgware Road, and a similar perception was also identified in our recent Insights Study. So we decided to celebrate and appreciate Edgware Road’s trees with a closer look at what we have and how they contribute to tackling climate change. There are 42 trees between the Marylebone Flyover and Marble Arch, excluding those on the Marble Arch islands and side streets.

Which are our biggest trees?

Definitely our London Planes (Platanus x hispanica). They can grow to 35m and outlive all of us, by several hundred years sometimes. The bark is multi-coloured, with green/grey scaly plates that peel off to reveal smoother creamy-coloured bark beneath. This is to disperse pollutants, and reflects the London Plane’s ability to cope with high levels of air pollution. The London plane tree is one of the most important species in central London, make up the largest leaf area of all tree species, bringing the most benefits for air quality and shade. In the winter months look out for the catkins hanging down on long stems.

We have five on Edgware Road and it’s a tough competition between the Planes at the entrance to Connaught Place in the south and the Plane on the corner of Sussex Gardens, near Boots. Our call would be the latter.

A fairly young London Plane can be found outside the Hilton London Metropole. There are two young trees here. The one nearest Praed Street is a Rowan (Aucuparia) – a close relation to the Ash tree, a common tree in the UK, although they don’t do that well as street trees. In Celtic mythology a Rowan is the Tree of Life. Next up is our young London Plane, near the Joe Strummer subway.

Which is our most prevalent tree species?

That will be the Lime (Tilia x europaea). We have 21 lime trees, concentred in the stretch of Edgware Road between Burwood Place/Harrowby Street and Marble Arch. Limes play host to big aphid populations (including hoverflies, ladybirds and also many species of bird) which drip sticky honeydew deposits on anything lying underneath the trees. Lime leaves are also eaten by the caterpillars of many moth species. Bees also drink the aphid honeydew deposited on the leaves. So our Limes get the gold star for aiding pollination on Edgware Road.

There are seven pear trees (Pyrus communis) below The Watergardens, the stretch from Barclays Bank to Boots. Pear trees are deciduous (shedding their leaves annually) and usually grow to about 12m, though some can reach up to 20m. The crown of the tree is domed, and the branches can have spiny twigs. As you can see our pear trees are battling with the canopy above the parade of shops on Edgware Road, and their crowns have been adapted to fit the canopy. As they are fairly young pear trees, they do not yet bear fruit.

Pear trees below the Watergardens

What is our oldest tree species on Edgware Road?

These would have to be the two Green Magnolias (Grandiflora) at Nutford Place. They provide year-round pleasure, with large fragrant flowers from July right through to November in milder winters. The flowering can be sparse, but beautiful.

Which are our youngest trees?

Developers Almacantar have recently planted new lime and pear (Pyrus calleryana) trees at Marble Arch Place. The pear trees surround the newest public art, Circadian, and create an avenue between the two buildings. The new lime tree is on the corner of Edgware Road and Bryanston Street.

Which are the most special trees on Edgware Road?

We all have a soft spot for the three oak (Quercus robur) trees planted at the junction of Bayswater Road, Edgware Road and Marble Arch by Transport for London in 2016.

These surround the Tyburn Stone Plaque which commemorates those who lost their lives at the Tyburn Gallows at Marble Arch.

Oaks can grow up to 40m tall and are something of a national emblem, adopted as the symbol for many environmental groups including the Woodland Trust. Whilst our oaks are very young, mature oaks and oak forests are home to hundreds of insect species, providing a vital food source for birds. Squirrels, badgers and deer feed on their acorns in the autumn. Oaks support more life than any other native tree in the UK.

Who looks after our trees?

Transport for London is the highway authority for Edgware Road between Marble Arch and St Johns Wood Road and this includes responsibility for street trees.

They regularly check the condition of trees with a team of professional arboriculturists, removing trees if they are dead, diseased or are a danger to disrupting transport services or causing harm to people or property. Replacement trees are planted where appropriate. Vegetation is pruned to ensure signals and sightlines are clear for drivers, and tree branches do not pose a danger to passing buses.

Could we see more trees on Edgware Road?

The stretch of Edgware Road from Harrowby Street to the Marylebone Flyover contains no street trees at all. TfL are committed to increasing the number of street trees in London, with the Mayor having set a target of a 1% increase each year, to build a resilient tree population for future generations. The biggest constraint on Edgware Road is poor ground conditions with a mass of utilities laid under the pavement.

Despite this, the BID is continuing to explore opportunities for additional green infrastructure across the district, including rain gardens at the Marylebone Flyover in partnership with TfL and small scale greening projects funded through Neighbourhood Community Infrastructure Levy (CIL).

With thanks to The Woodland Trust, Tree Talk London and Transport for London for source material.

Almacantar has unveiled a new sculpture in the public realm at Marble Arch Place, an impressive new landmark development for…

Closure of the Joe Strummer Subway

As part of Marble Arch London’s proposals with Transport for London to create new rainwater gardens below the Marylebone Flyover,…